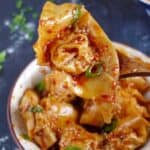 Tender meat in slippery wrappers seasoned with a chili oil based sauce, Sichuan spicy wonton combines great flavour and texture. Follow my recipe to make it in 30 mins. 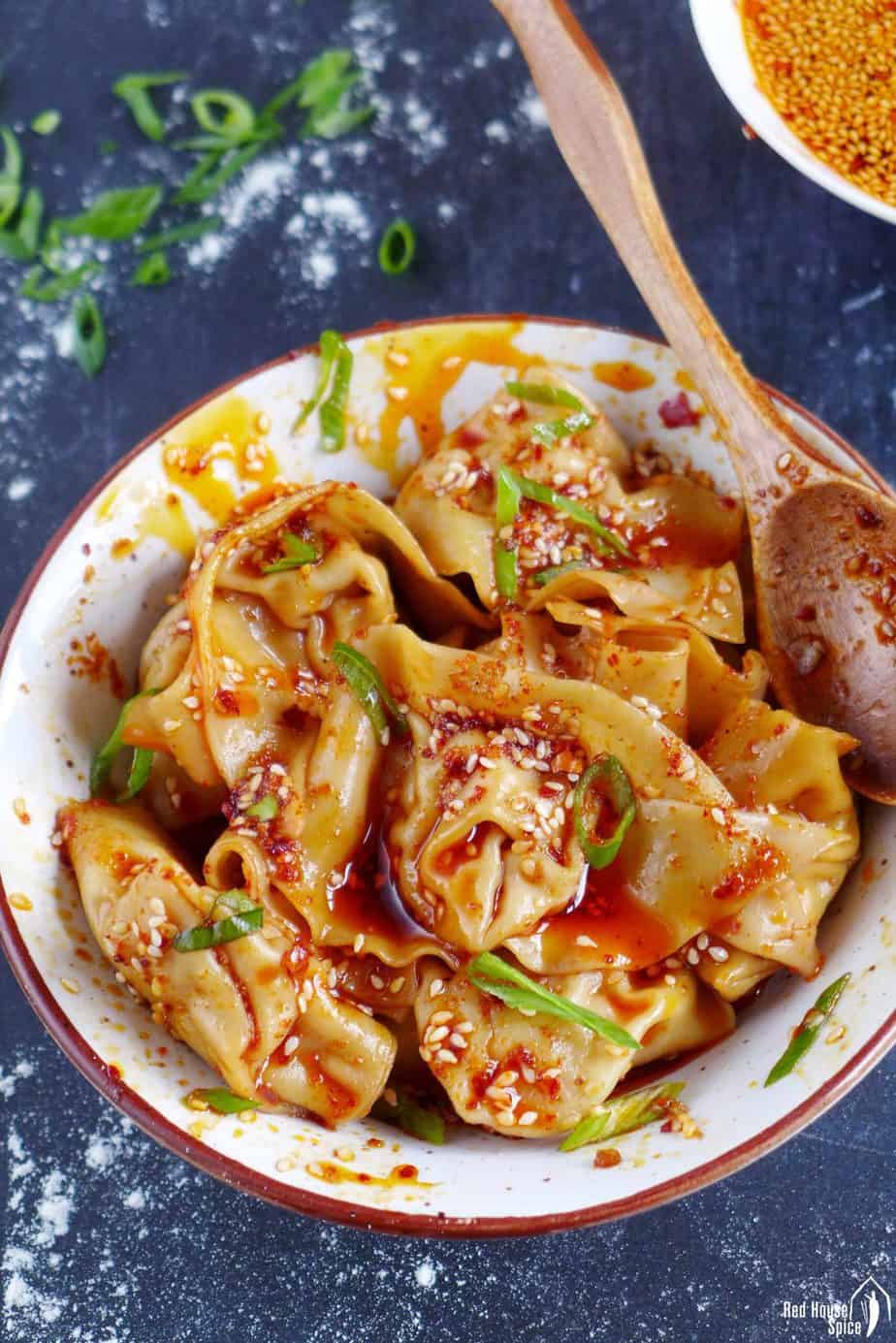 Wontons are stuffed savoury parcels consisting of thin, square wrappers and a meat-based filling. Considered one of the oldest types of Chinese dumplings (according to cookbook author Fuchsia Dunlop’s research), they are popular nation-wide in China.

Although universally called “Wonton” in English, in China its name varies depending on the region where they’re served. In northern provinces, they’re known as Húntun/馄饨. Cantonese people call it Yún Tūn/云吞. In Fu Jian, they’re Biǎn Shí/扁食. Yet in Sichuan where today’s dish originated, Chāo Shǒu/抄手 is its official name. 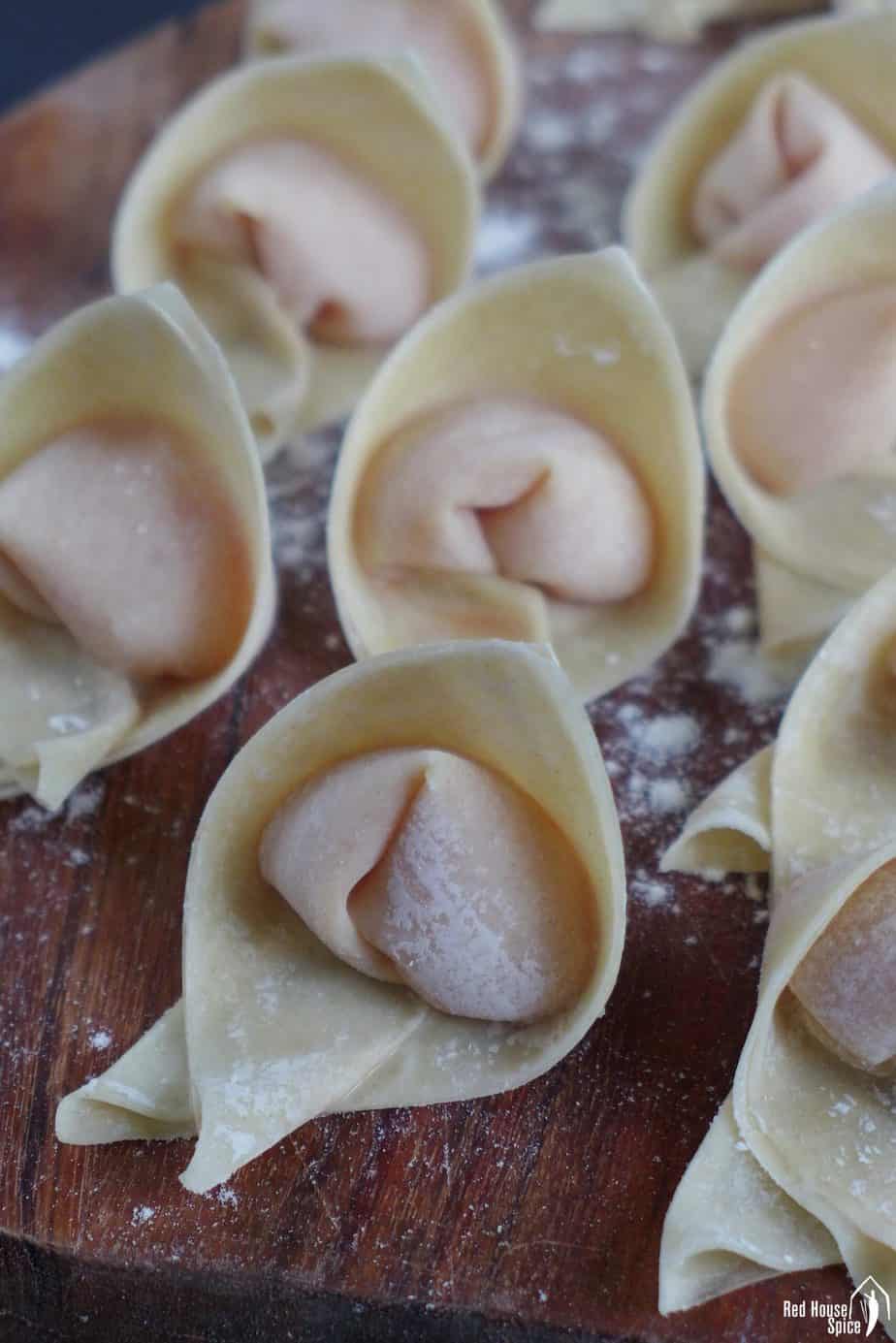 Spicy wonton in chili oil, known as Hóng Yoú Chāo Shǒu/红油抄手 (Red Oil Wonton), is one of the signature street foods (Small eats, 小吃) of Sichuan cuisine. Instead of being served in a broth like the classic Cantonese version, it comes with an aromatic, salty and pungent sauce.

It takes 3 simple steps to put this dish together: mix the meat filling; shape the wontons with ready-made wrappers; boil for a few minutes then mix with the sauce. 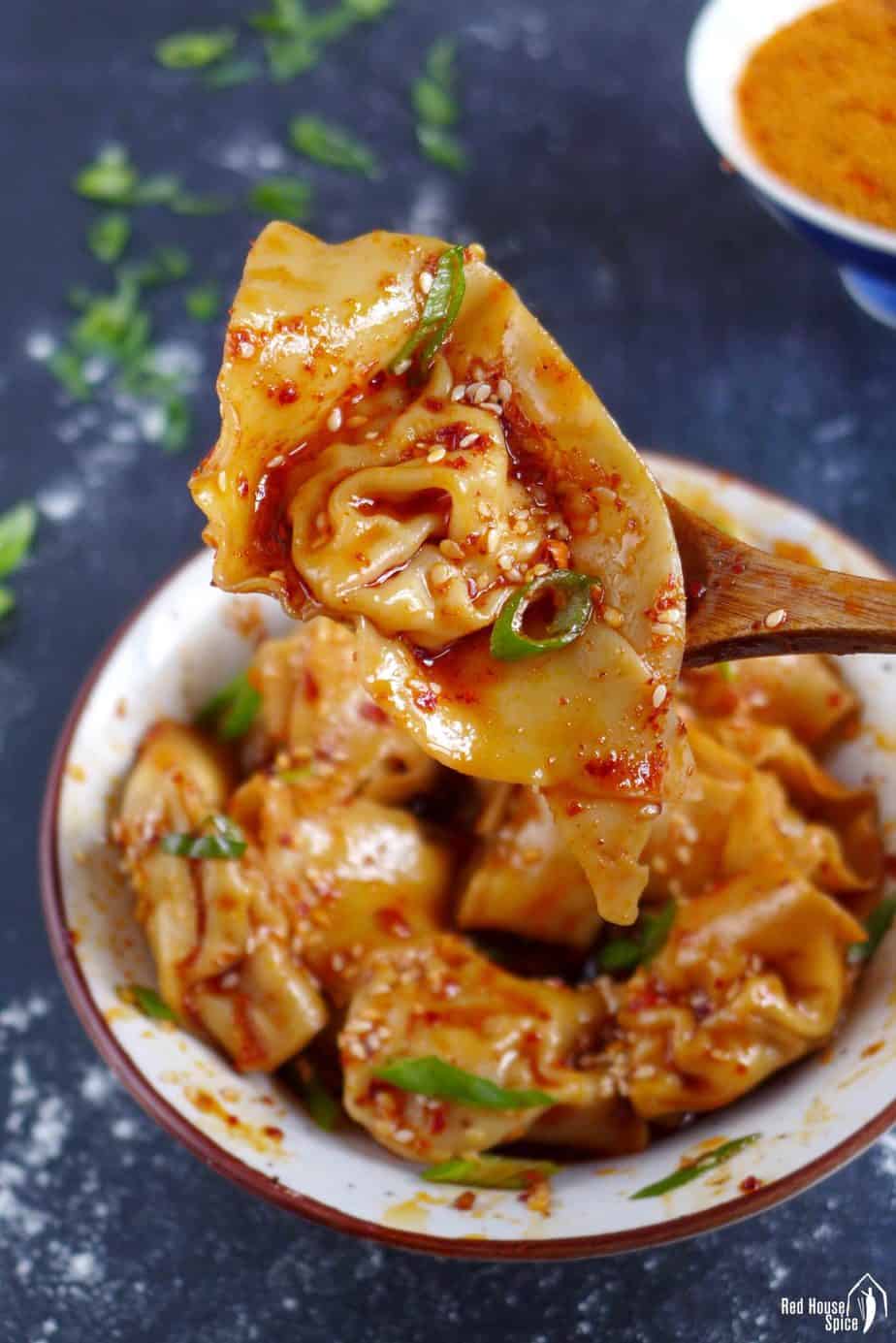 What makes a wonton distinctively different from a regular dumpling (Jiaozi, 饺子) is its square-shaped, super thin and slippery wrapper. Although a loyal fan of homemade dumpling wrappers as oppose to commercial ones, I usually use shop-bought wonton wrappers since it takes much time and effort to make them by hand and the result is seldom as good as machine-made ones (A pasta maker helps though. I’ll write a separate post in the future). 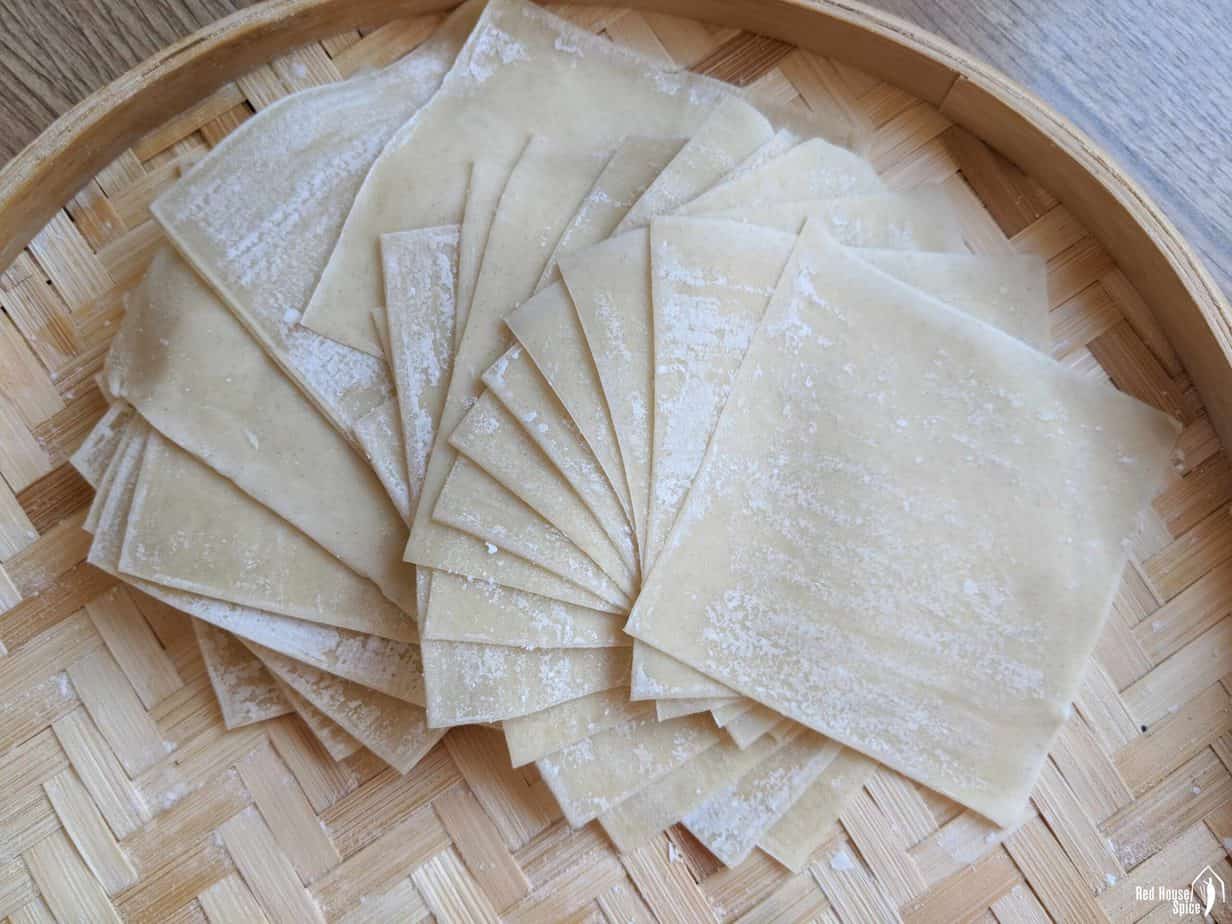 In the frozen goods section of Chinese/Asian stores, you might find two types of wonton wrappers: one is off-white and the other looks quite yellow as it contains alkaline. Both work fine for today’s recipe (although traditional Sichuan spicy wonton has the former look).

The night before you plan to cook this dish, remember to leave the wonton wrappers to thaw slowly in the fridge (do not open the package).

Traditionally, Sichuan spicy wonton in chili oil uses minced pork for the filling. That said, please feel free to substitute it with minced beef or chicken/turkey if you prefer.

Different from fillings that I introduced in my dumpling filling posts and my Easy Pork Wonton Soup, today’s recipe makes an extra tender and moist stuffing that’s mildly seasoned. This way, it creates an interesting contrast with the pungent, salty sauce that I’ll explain in later sections. 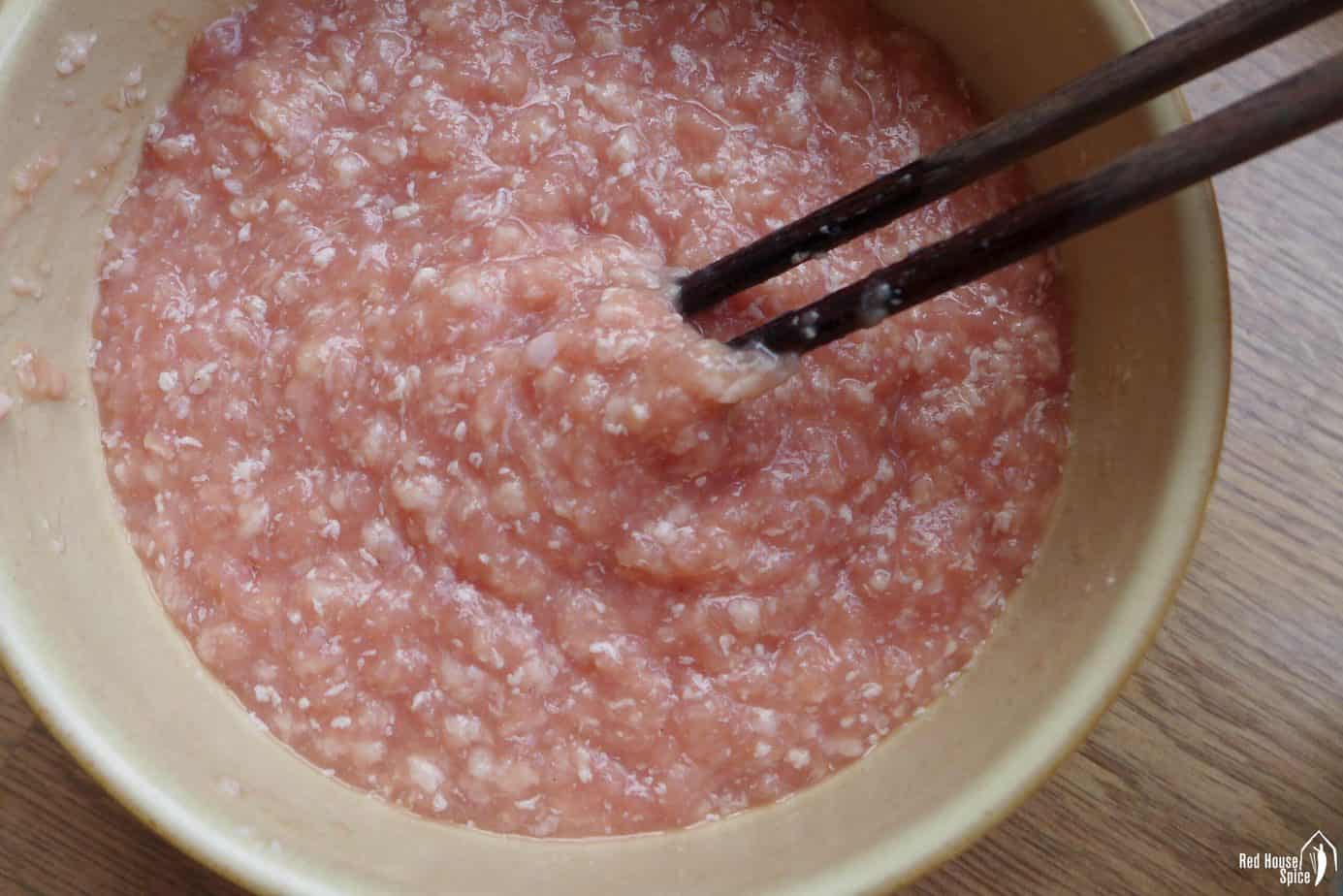 How to fold wontons

If you find pleating a regular dumpling or a bao bun challenging, today’s wonton folding tutorial will ease your nerves. It’s very straightforward and simple! Although there are a few variations of wrapping styles, here is a classic method: 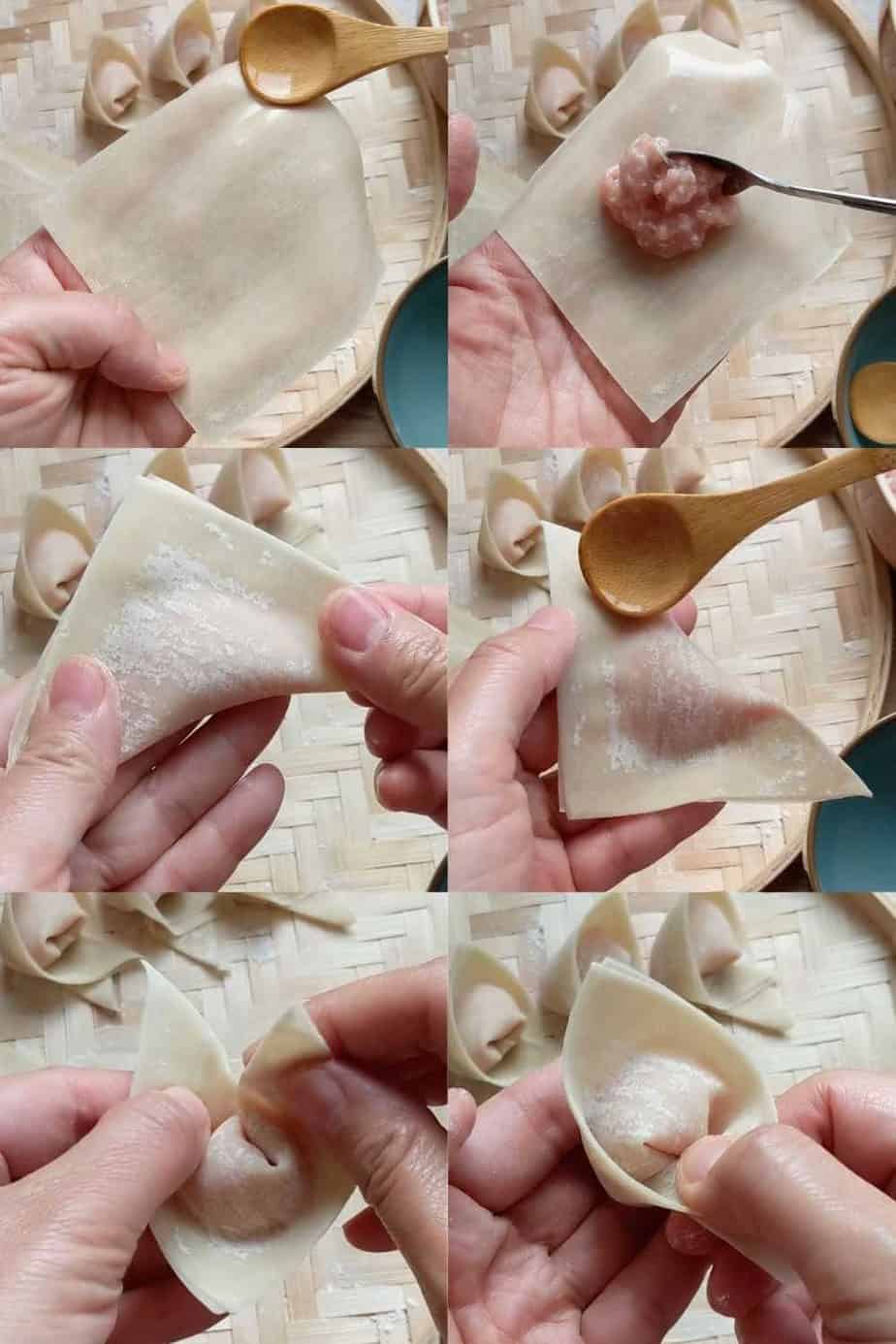 If you’re not tight on time, check out the tutorial video in the recipe card below for a better understanding of how it works.

Since the wrappers are very thin, it doesn’t take long to boil wontons (much shorter than cooking regular dumplings). Depending on the size of your cookware, you may be able to cook several servings all at once or in batches. 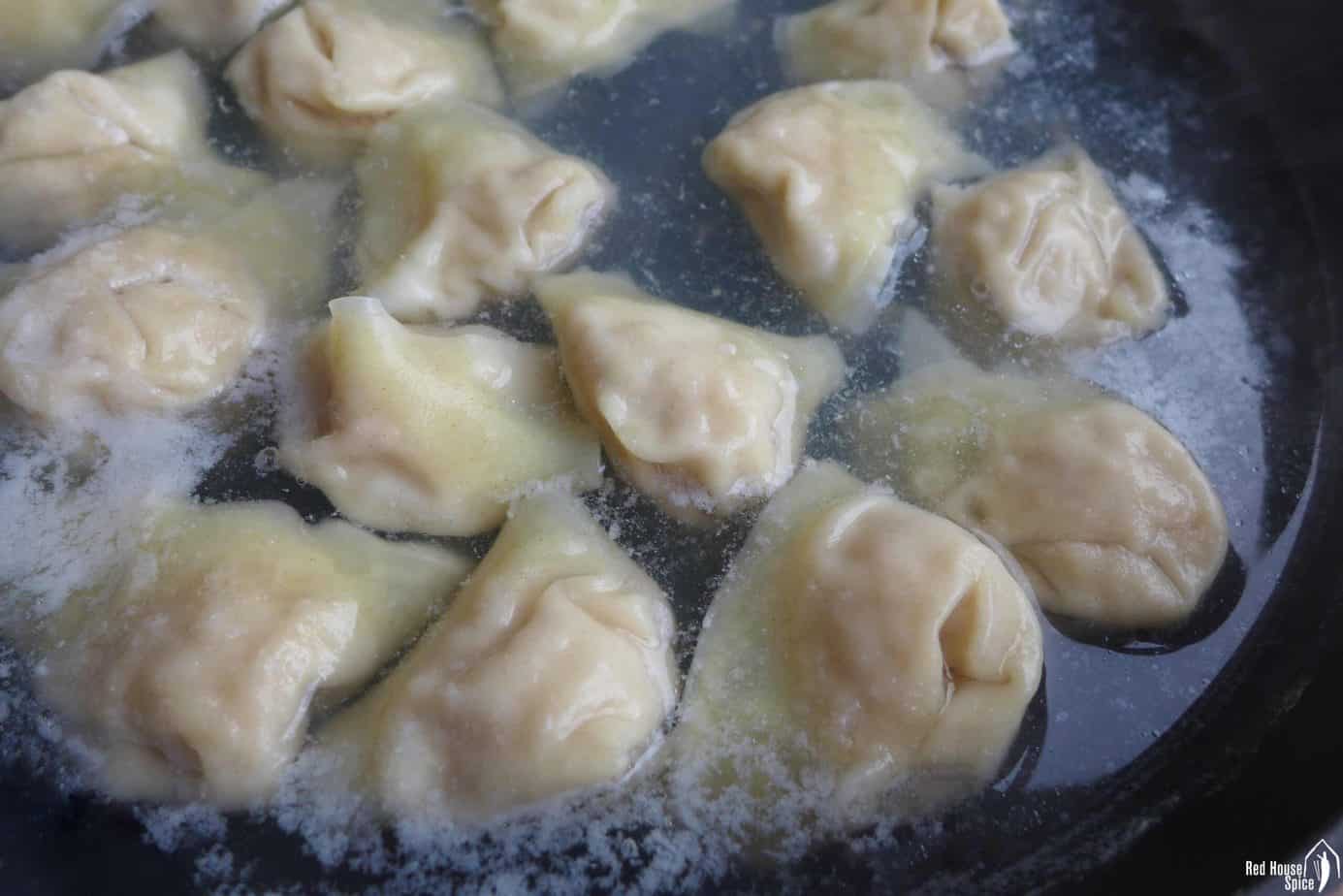 Here is a trick to help you make a judgement: Place the lid of your pot upside down on your hand. Cover its surface with wontons without overlapping. That would be the maximum amount you could cook at once.

While waiting for the wontons to cook, you can start preparing the most exciting part of the dish: the spicy Sichuan wonton sauce. Salty, aromatic, numbing, spicy, with a hint of sweetness, it’s such an addictive combination of seasonings. 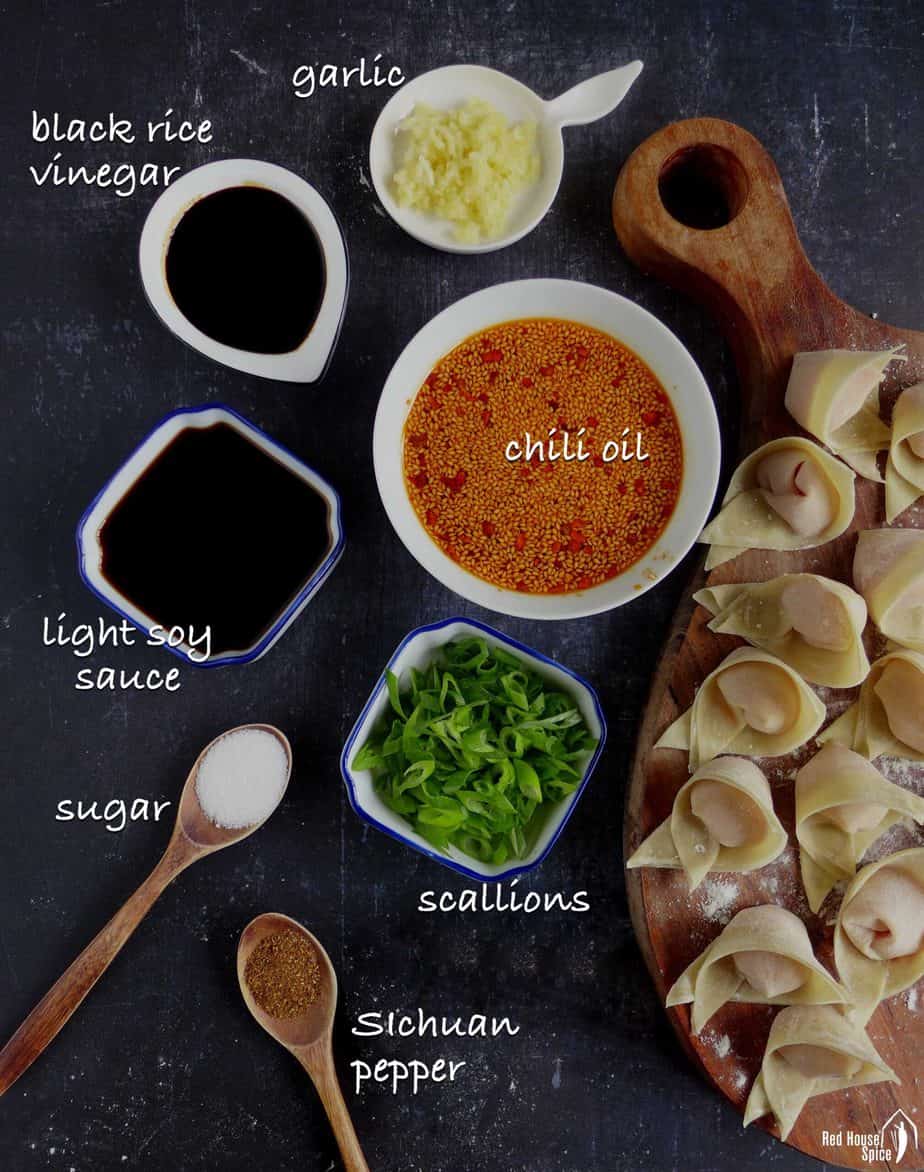 Bring out the serving bowls and add the following ingredients to each one (The quantity is for one portion with 10 wontons).

If you fancy an extra nutty flavour, you could also add some crushed, toasted peanuts or a teaspoonful of Chinese Sesame Paste. 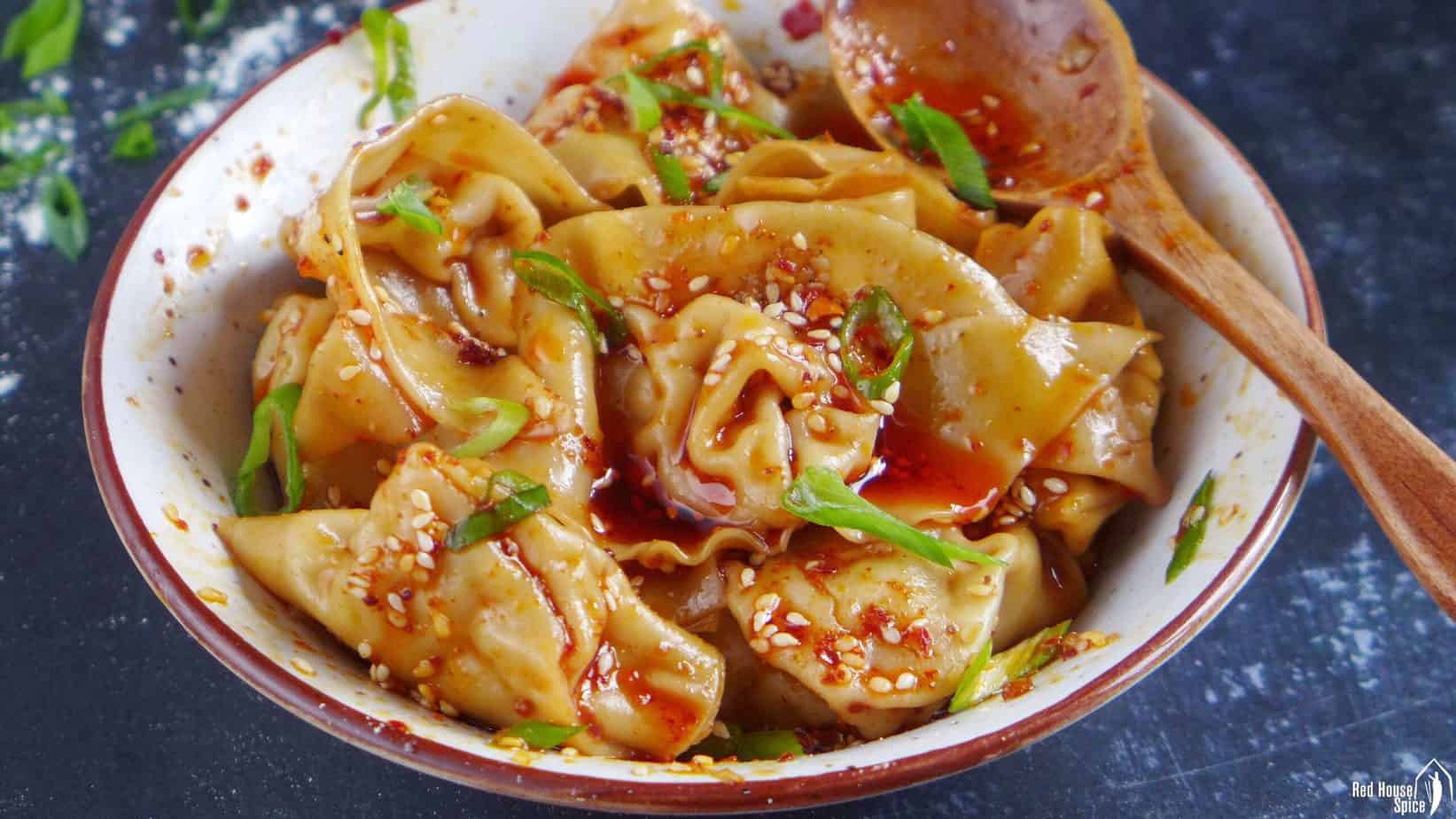 Use a slotted spoon to transfer the hot wontons straight into the bowls. Give everything a good mix then sprinkle with finely chopped scallions.

Make your own chili oil

From the Chinese name of this dish “Red Oil Wonton”, you can tell that chili oil plays a key role which determines the level of deliciousness. If you haven’t tried my recipe for Homemade Chili Oil, it’s time to give it a test! You’ll regret you haven’t brought it into your life sooner. Believe me! 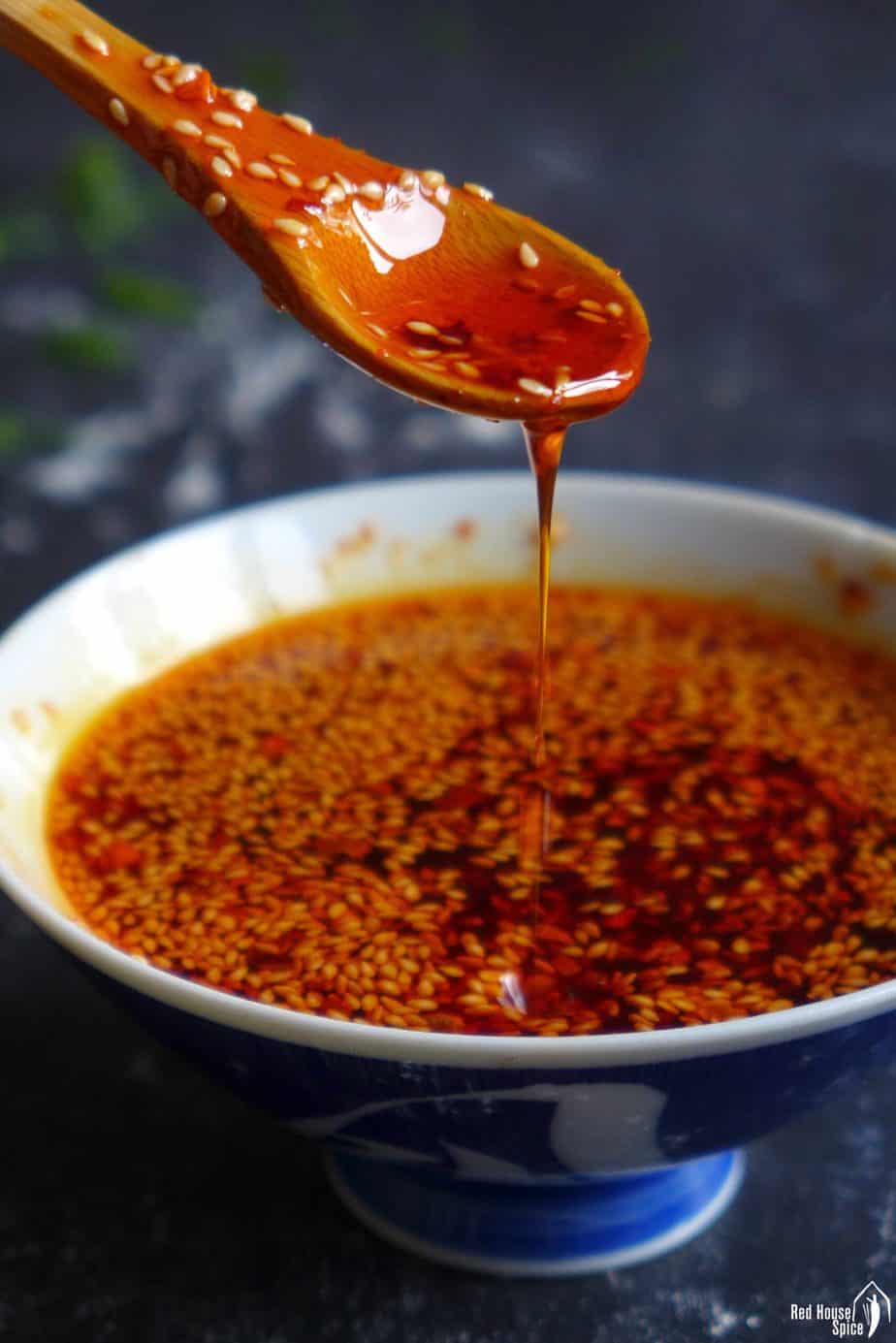 I usually add about 2 tablespoons of chili oil to each serving of Sichuan spicy wonton. Make sure you stir it very well before spooning it out so that you get the red oil, as well as some sediment which sinks to the bottom. Please feel free to adjust the quantity based on your own tolerance to heat.

“It looks super hot!” I often get comments like this when I present dishes with a good amount of chili oil. The fact is that they usually don’t taste insanely spicy. Using a mixture of chili flakes and chili powder with different heat level, your chili oil could look hot but taste just right in heat.

My recipe makes 40 wontons which are enough for about 4 servings (The shop-bought wrappers usually come in 40-50 package). Even if you plan to serve less on the day, I still recommend you follow the recipe and freeze the leftover for later use. 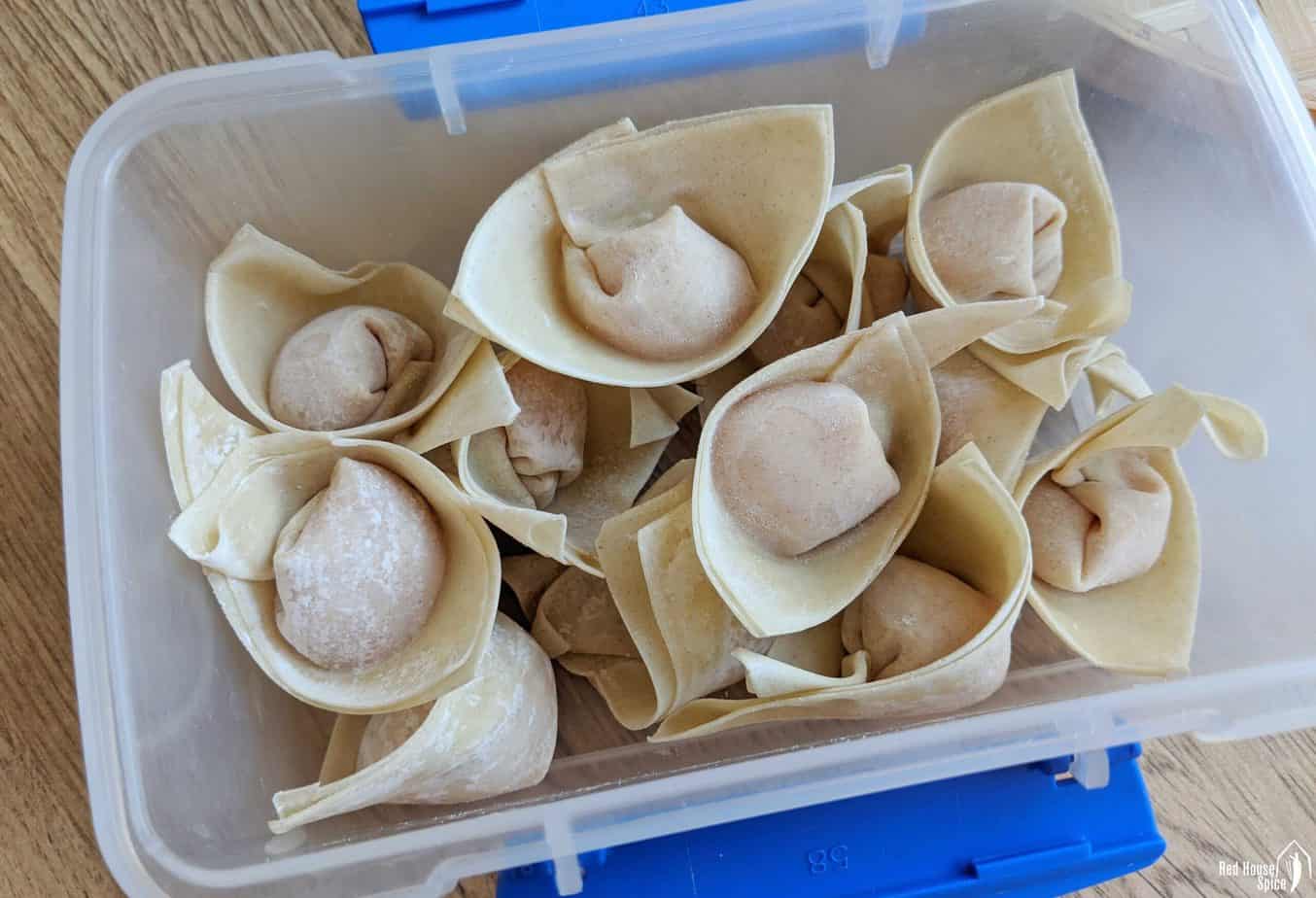 Put the assembled wontons in a single layer on a plate/tray. Keep in the freezer until they’re fully frozen. Then transfer to an airtight container/bag. Store in the freezer for up to three months.

You don’t need to defrost the frozen wontons beforehand. Cook them following the same procedure. 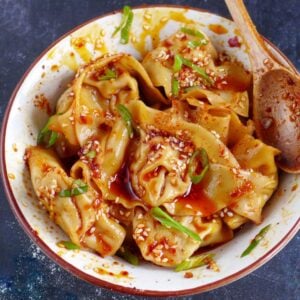 For each portion of the sauce

1. For best flavour, grind your own Sichuan pepper powder following my recipe. If you’re unfamiliar with this unique Chinese spice, read my Complete Guide on Sichuan Pepper. 2. I have a separate blog post and recipe dedicated to homemade Chinese chili oil which is a versatile condiment that can be used in many dishes. I highly recommend you give it a try.