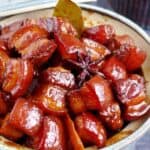 Tender, gelatinous and aromatic, Chinese red braised pork belly is scrumptious and comforting. This recipe shows you how to cook it effortlessly.

A dish popular nationwide in China

A popular cut of meat, pork belly is treasured by many great cuisines around the world. Containing a high percentage of fat, it needs to be cooked in a particular way to reduce its greasy taste. In China, the most loved pork belly dish has to be Hong Shao Rou (红烧肉), known in English as red braised pork belly or red-cooked pork belly.

Pork belly chunks are braised with soy sauce, rice wine, sugar and spices to create a complex taste: salty, sweet, aromatic and umami. The skin and fat become gelatinous, not greasy and melt easily in your mouth.

Apart from the desired taste and texture, braised pork belly also stands out for its red-brownish shine. That’s where the word “red” in its name comes from. Among many varieties of this dish from different regional cuisines of China, there are two classic ways to achieve this effect.

The famous Hunan style is believed to have been Chairman Mao’s favourite dish (Hunan was his home province). Rock sugar, in this version, is melted in hot oil to a caramel colour to give the meat an appetising appearance. Another popular variety from Shanghai cuisine involves dark soy sauce which plays a key role in colouring the pork.

The famous Hunan style is believed to have been Chairman Mao’s favourite dish (Hunan was his home province). Rock sugar, in this version, is melted in hot oil to a caramel colour to give the meat an appetising appearance. Another popular variety from Shanghai cuisine involves dark soy sauce which plays a key role in colouring the pork.

Why you should try this easy version

Over the years, I’ve made braised pork belly numerous times using different seasonings and methods inspired by various versions of this dish. Eventually, I settled down with a recipe that’s super easy, yet delivers a great result.

There is no frying involved (leaving you a greaseless kitchen) thus no extra oil needed (there’s enough fat in the pork belly already). And you don’t have to master the skill of caramelising the sugar properly. Yet the finished dish is more than satisfying. It’s totally novice-friendly. I promise!

What ingredients do you need

The ingredient list is short and simple. Here are some tips on sourcing them that you might find useful.

The star ingredient of the dish, pork belly is the fattiest yet the tastiest cut of pork. It’s not recommended to use skinless one. After cooking, the skin becomes super tender and gelatinous. You’ll love it for sure!

I usually cut it into 2-3 cm cubes (about 1 inch). You could use bigger chunks if you wish. Make sure they’re more or less the same size and extend the cooking time if necessary.

A type of Chinese cooking wine, Shaoxing rice wine (绍兴酒) lends an aromatic, rich flavour to the meat. It also seems to minimize its greasiness.

Unlike in many other recipes which call for only a spoonful of Shaoxing rice wine, for this dish I recommend you use at least 250ml (about 1 cup) for 600g (1.3lb) of pork belly. In fact, you could increase the quantity and use only rice wine (without water) as the braising liquid.

Commonly available in Chinese/Asian stores, Shaoxing rice wine can often be found in the world food section of mainstream supermarkets (eg. Tesco, Morrisons, etc. in the UK). It definitely deserves a place in your pantry if you’re keen to master Chinese cooking.

I use two types of soy sauce: light soy sauce (生抽) and dark soy sauce (老抽) for this dish. The former acts like an aromatic salt. The latter, which tastes less salty but offers a caramel overtone, is the key ingredient for giving the pork a beautiful brownish-red shine. So I don’t recommend that you substitute it with regular soy sauce.

Three simple ingredients, ginger, star-anise and bay leaf, are often found in classic Chinese braised dishes. They help to reduce the gamey taste of the meat as well as enhance its aroma.

A type of refined, crystallized sugar, Rock sugar is traditionally indispensable in Chinese pantries. Less sweet than white sugar, it’s believed to add shine to braised dishes. However, please feel free to replace it with regular sugar if you wish.

It does take a while to cook this dish to the desired texture, but the process is simple and hassle-free. Here are the three steps:

Blanching is a required procedure when cooking Chinese-style braised meat. It’s for removing blood and other impurities from the muscles and bones thus achieving a less cloudy broth and a less gamey taste.

Put the pork belly cubes into a pot filled with cold water then turn on the heat to high. As soon as it starts boiling, you’ll see froth appearing on the surface. Use a spoon to remove most of it. Then drain and rinse the meat under running water.

Turn on the heat to bring the liquid to a full boil. Cover with a lid and turn down the heat. Leave to simmer for at least one hour. Poke one piece of meat with a chopstick to check the tenderness. If it goes through without much resistance, you’re ready to move onto the next step.

During this process, remember to stir around the meat 1-2 times. If you notice the liquid becomes too little, add a small amount of hot water to prevent burning (but no need to reach the original volume).

Turn the heat up to the highest. Add rock sugar (or regular white sugar) to the braising liquid and leave to boil fiercely. As the sugar melts and the water evaporates, the broth will dramatically reduce its volume and become thicker.

During this process, stir the pork cubes from time to time to ensure each piece gains an appetising colour and shine. Remove from the heat when the broth is just enough to cover the bottom of the pot (Over-boiling can burn the sauce). Please refer to the tutorial video in the recipe card below.

A note about the cookware: If possible, use a small-sized pot so you wouldn’t need too much water to braise the meat making the final thickening process shorter.

How to serve this dish 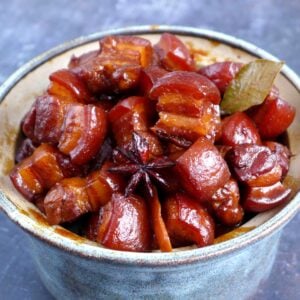 1. A very common and versatile condiment, Shaoxing rice wine (绍兴酒) can be found in Chinese/Asian stores and world food sections of some mainstream supermarkets.  2. Dark soy sauce plays an important role in this dish so I recommend you make an effort to source it. If unavailable, replace it with ½ tbsp of regular soy sauce. 3. I use a 20cm/8inch small pot so that I don’t need to add too much water to cover the meat.

Hope you feel inspired to give my recipe a try! Leave a comment below or tag @red.house.spice on Instagram if you’ve made this dish. I’d love to hear from you!

N.B. This post was originally published in Feb 2017 and updated with improved information in Jan 2021.