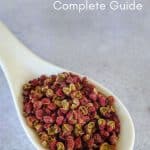 What is Sichuan pepper? What does it taste like? Is there a substitute? How is it used? How to judge its quality? Read my complete guide to this unique spice.

When it comes to Chinese cuisine, particularly Sichuan food, you can hardly miss a unique spice that gives numerous dishes an exciting zing: Sichuan pepper (花椒, Huā Jiāo). Based on the questions I’ve received from my readers, I’ve written a complete guide in Q&A form. I hope it will help you have a good understanding of this wonderful spice.

What is Sichuan pepper?

Sichuan pepper is the dried berry of a type of spiky shrub native to regions of Western China. Unlike its name suggests, it’s neither a pepper nor a chilli.

Unique to Chinese cuisine, it has been used as a spice since ancient times. It has a pinkish-red, pimply appearance and delivers a distinctive, mouth-numbing sensation known as Má/麻.

What are its other names in English?

What is it called in Chinese?

The Chinese name for Sichuan pepper is 花椒 (Huā Jiāo). It literally means flower pepper, as the red husks that hold black seeds inside “bloom” like a flower when ripe.

The term “Sichuan” is not included in its Chinese name. So if you ask a Chinese person for “Sichuan pepper”, highly likely they wouldn’t know what you are talking about. Or they might think you are looking for chilli pepper which is widely used in Sichuan cuisine.

It’s best to describe its taste in two dimensions:

That is why in ancient times Chinese people used Sichuan peppercorn as a remedy to relieve toothache. Put a few on the offending tooth, then bite and hold. After a while, you won’t have a toothache, but instead an overwhelming numbing sensation (I can’t tell you which is less unpleasant. Have a try if you are curious!).

What is green Sichuan pepper?

Green Sichuan pepper is a variety of Sichuan pepper that came to Sichuan culinary horizon in the late 90s. Unlike some people’s beliefs, it’s not the immature version of the regular red one.

Richer in scent, it has a very strong citrus smell but not much of a pine note. It also delivers a distinctive numbing sensation, but one which is slightly less intense.

Málà/麻辣, meaning numbing and spicy, is a Chinese term describing the flavour profile created by the combination of Sichuan pepper and chilli pepper. It’s the iconic characteristic of Sichuan cuisine.

What is the substitute for Sichuan pepper?

There isn’t any substitute for Sichuan pepper. Some suggest that Tasmanian pepper, black pepper or coriander seeds can be good substitutes. If you have ever tasted it, I bet you wouldn’t agree with such a statement.

The powerful numbing sensation that Sichuan pepper creates makes it distinctive and unique. None of the other peppers delivers the same effect.

Can black pepper be a good substitute?

What if a recipe calls for it but I don’t have any?

For some dishes in which Sichuan pepper doesn’t play an important role, you may simply omit it. But for dishes which stand out for their Málà /麻辣 flavour, the lack of Sichuan pepper will change the overall taste. Highly like the dish will still taste great but it loses its authenticity.

How to use Sichuan pepper?

Sichuan pepper has a firm position in the Chinese kitchen and it can be used in a variety of ways for numerous dishes. Essential to Sichuan cuisine, it’s also widely used in other Chinese regional dishes. Here is a list of cooking inspirations & recipes:

Do you use the black seeds inside the husks? 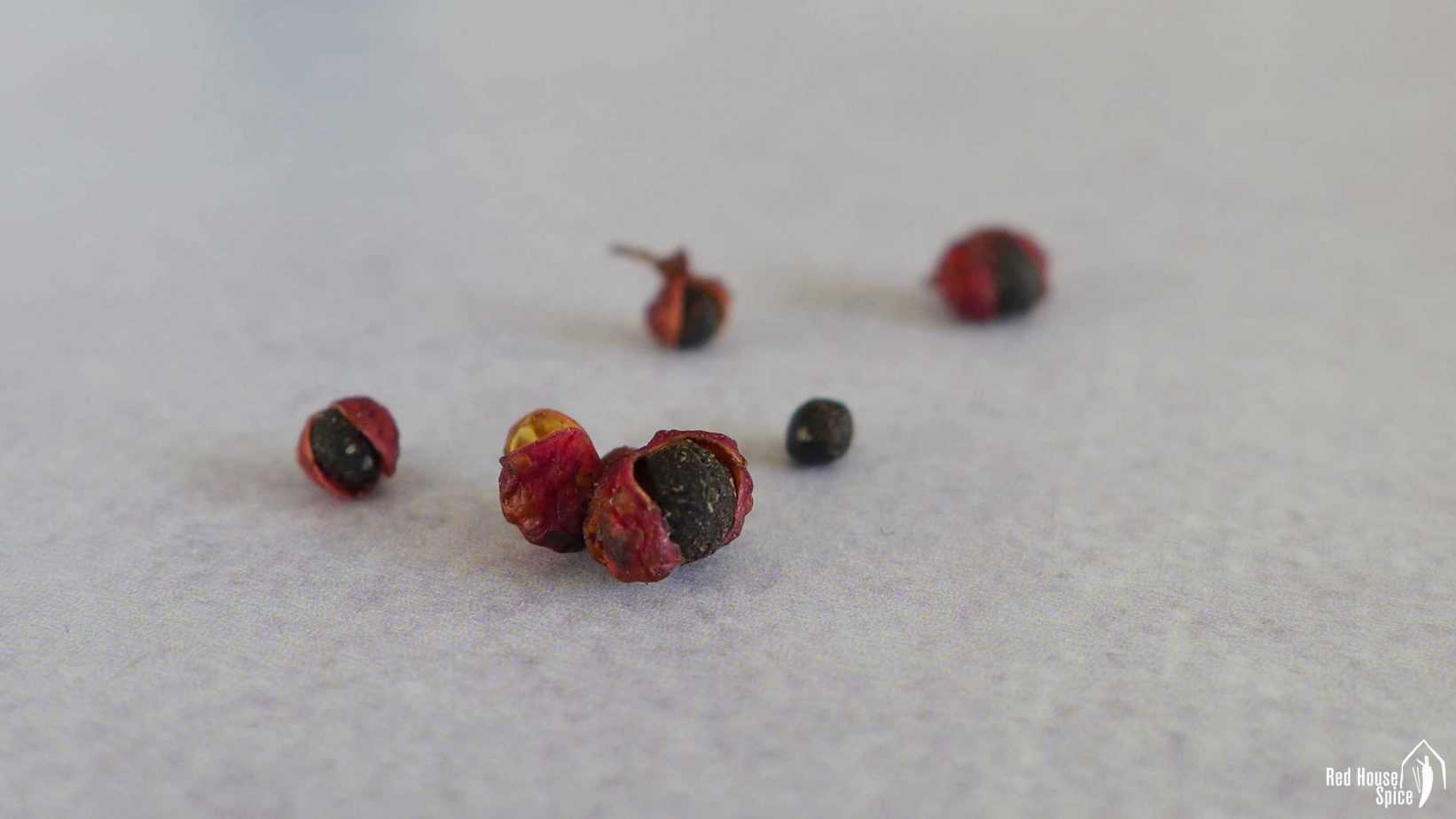 No. They are hard, flavourless and have a gritty texture when crushed. Good quality Sichuan pepper should only have a few black seeds left inside the husks. If you wish to make your own powder, you need to manually remove the black seeds before grinding.

Do you eat whole peppercorns found in dishes?

Not normally. Whole Sichuan peppercorns are used to add another layer of flavour to the main ingredients. People usually don’t eat them as the numbing sensation they provide might be too strong hence they impair the overall taste of the dish.

How to grind it? 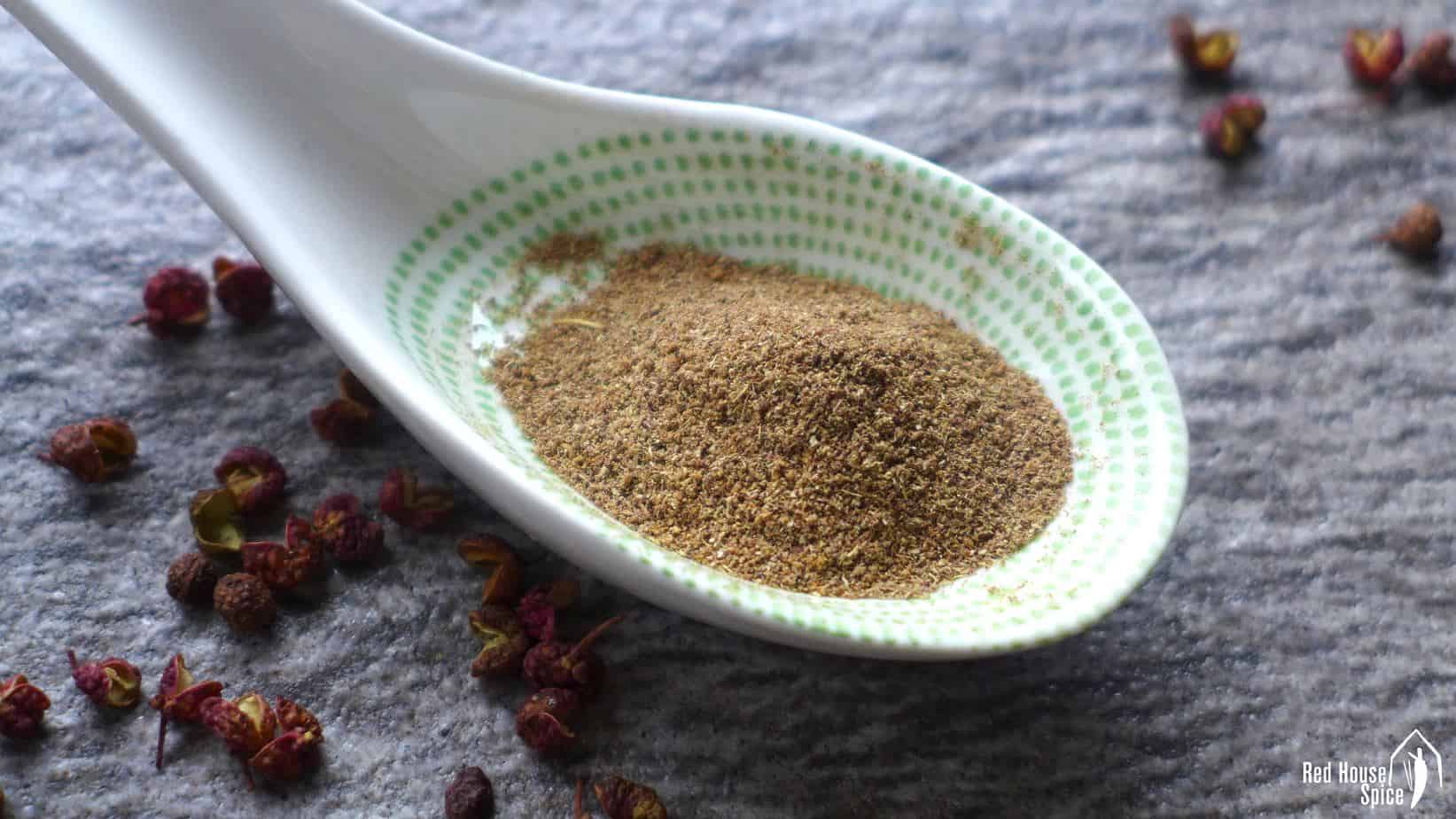 How much shall I use in a dish?

For most Chinese dishes, you only need to add small amounts. Usually, ½ teaspoon of whole pepper or ¼ teaspoon of ground pepper would be enough for a 2-serving dish.

That said, you might need to increase the volume if your Sichuan pepper has lost some of its freshness and doesn’t taste as potent as it should be.

Can I use it for sweet dishes?

Having been used by Chinese as a spice for cooking for thousands of years, Sichuan peppercorn also plays a role in traditional Chinese medicine for healing indigestion, arthritis, diarrhoea etc. together with other plants/herbs. However, its nutritional benefit in food is insignificant as only very small amounts are needed and usually the whole peppercorns aren’t eaten.

How to buy Sichuan pepper?

You can identify good quality Sichuan pepper by looking out for the following traits:

Are there different varieties?

Yes. Depending on the region where it’s produced, Sichuan peppercorn differs in appearance, size and taste. The most famous varieties include “Hàn Yuán/汉源”  from Hàn Yuán county in Sichuan, “Dà Hóng Páo/大红袍” from Wu Dū county in Gansu.

Where to buy it?

Sichuan pepper is available in most Chinese/Asian stores. Look for it in the spice section where you would also find star-anise, Chinese cinnamon, etc. Online shopping is another option.

Some major international spice brands now have it on their product line. So you may find it in mainstream supermarkets too. But I haven’t found any good ones. They are usually too mild in taste.

What’s the best place to buy when visiting China?

It is sold nation-wide at all types of food retail outlets. When possible, I suggest you hunt for it in local markets where you can touch, smell and taste the loose peppercorns.

How to store Sichuan pepper?

It’s best to store Sichuan pepper in airtight containers/bags away from heat & direct sunlight. Due to its powerful scent, it’s advisable to keep it away from foods like tea and coffee.

How long does it last?

It doesn’t tend to go off but its aroma and numbing effect would decrease over time. Whole peppercorns could retain its quality for up to a year if stored properly. Ground pepper loses its taste more quickly so it’s advisable to finish it within 1-2 months (if making your own, grind a little at a time).