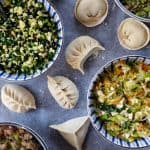 What makes a great filling for dumplings? I would say: ① A nice balance between the main ingredients; ② A great combination of flavours; ③ A moist, juicy texture. In the second part of my Ultimate Dumpling Guide, I’m sharing numerous tips to help you to achieve those goals. Four different filling recipes are also provided, including vegetarian and vegan versions.

In different regions of China, dumplings are filled with different combinations of ingredients. Let me name a few popular ones. 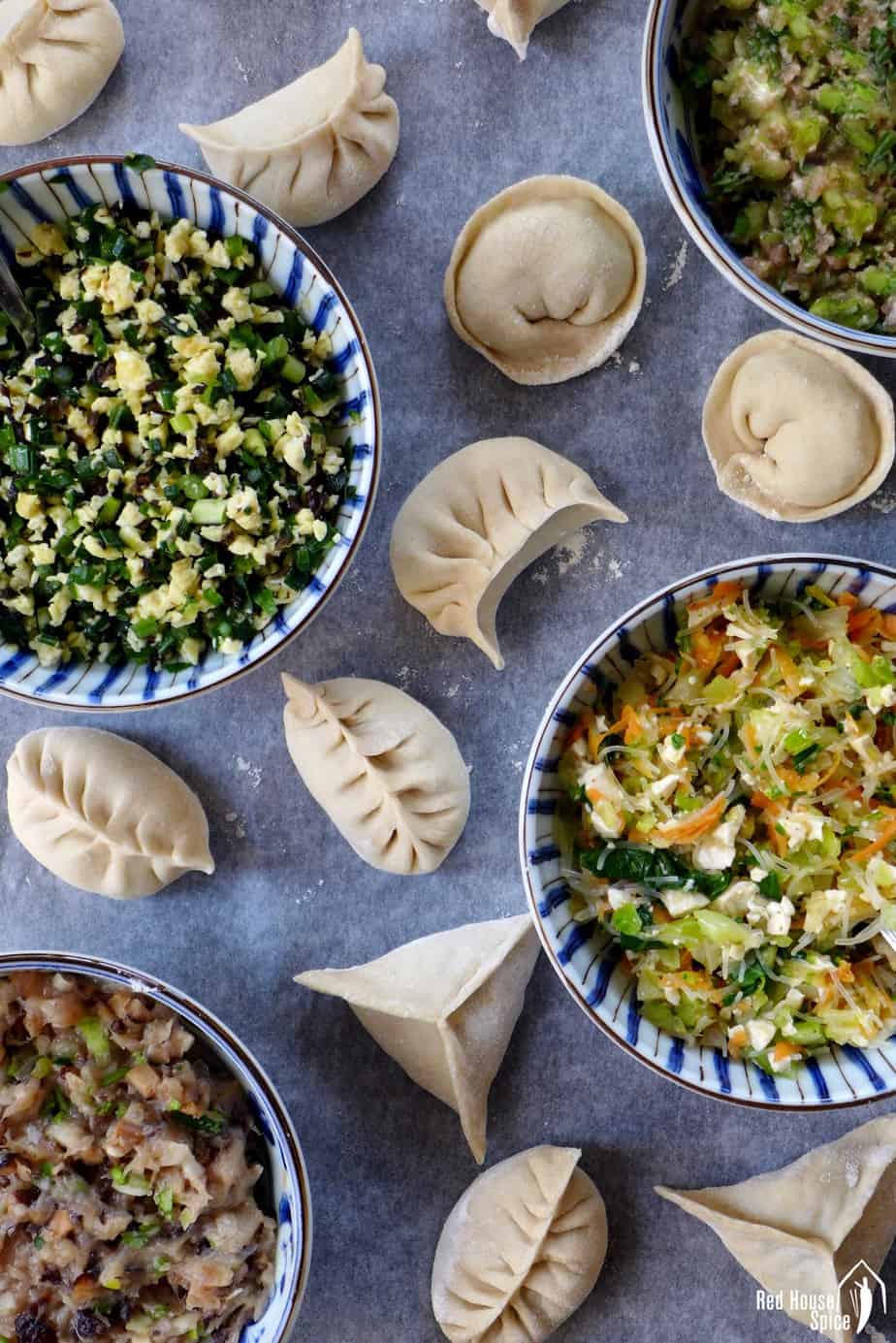 What to use in dumplings?

When it comes to dumpling fillings, there are so many choices. Use your imagination to mix and match whatever ingredients you fancy.

Apart from meat, fish and seafood that are used in the regional specialities I mentioned above, vegetables play a very important role. They are either mixed with meat / fish / seafood or stand on their own. Chinese cabbage, Chinese chive, fennel leaves, courgette, carrot, daikon, stem lettuce, aubergine, tomato, cucumber, celery, spinach, coriander, bamboo shoot…… The list goes on.

For vegetarian versions of dumpling fillings, egg and tofu are popular sources of protein. 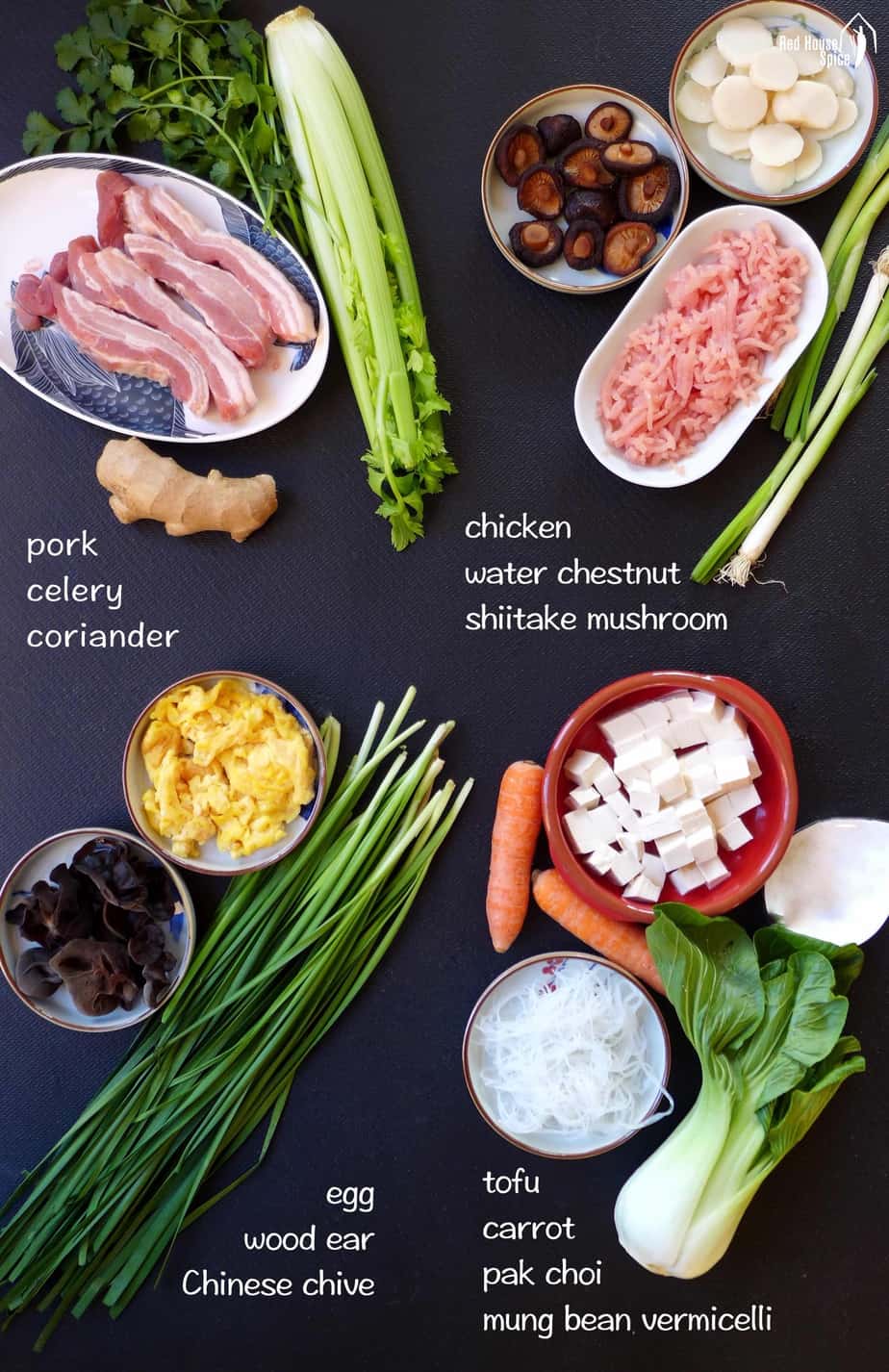 There are a few more special ingredients that I’d like to recommend for dumpling fillings. 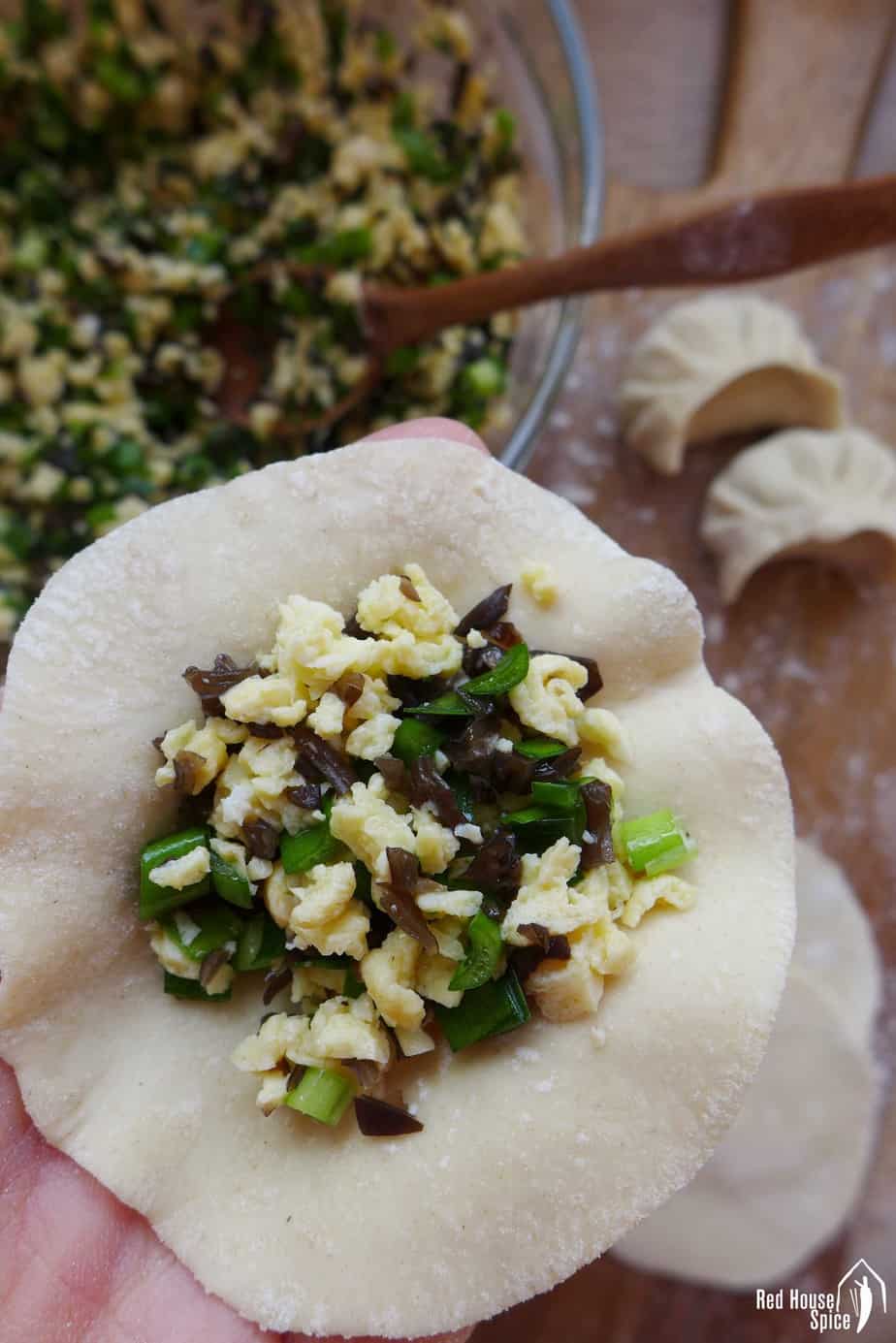 How to make it moist & juicy?

When preparing meat based fillings, the most common problem home cooks face is how to make it moist and juicy. I have a few tips to offer.

INCLUDE FAT CONTENT: I would recommend no less than 20% of fat, for example for pork fillings. If you can’t find ready to use minced meat that has a high percentage of fat, buy some nice cuts of meat then mince it yourself: with a cleaver or a food processor (I found a good article that clearly explains  “How to grind your own meat in the food processor”).

ADD COOKING OIL: If you prefer non animal fat, add some cooking oil instead (rapeseed, sunflower, vegetable, peanut, etc.). My favourite way is to heat up the oil then pour over chopped spring onion / ginger. It really brings out the best flavour!

“BEAT” LIQUID IN: This process is called Daxian (打馅) in Chinese which literally means “beat the filling”. 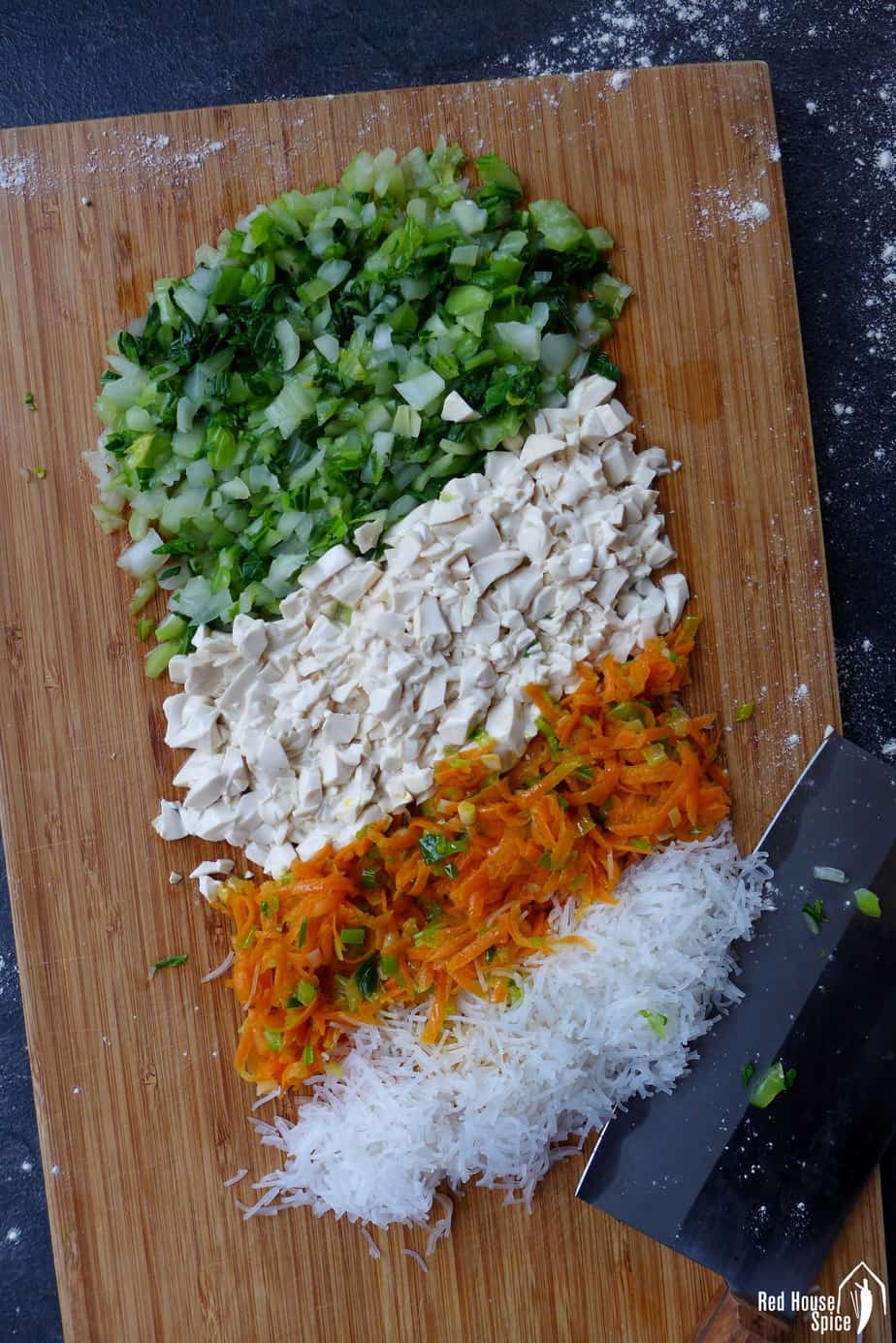 How to fix a wet filling

It’s important to make the filling moist. However, you might encounter another problem when using vegetable(s): the filling is too wet thus makes dumpling assembly challenging. To minimize the potential problem, I suggest you:

If preparing a meat and veggie filling:

If preparing a vegetable filling:

If the filling does get too wet:

In any case, you need to follow another two rules: 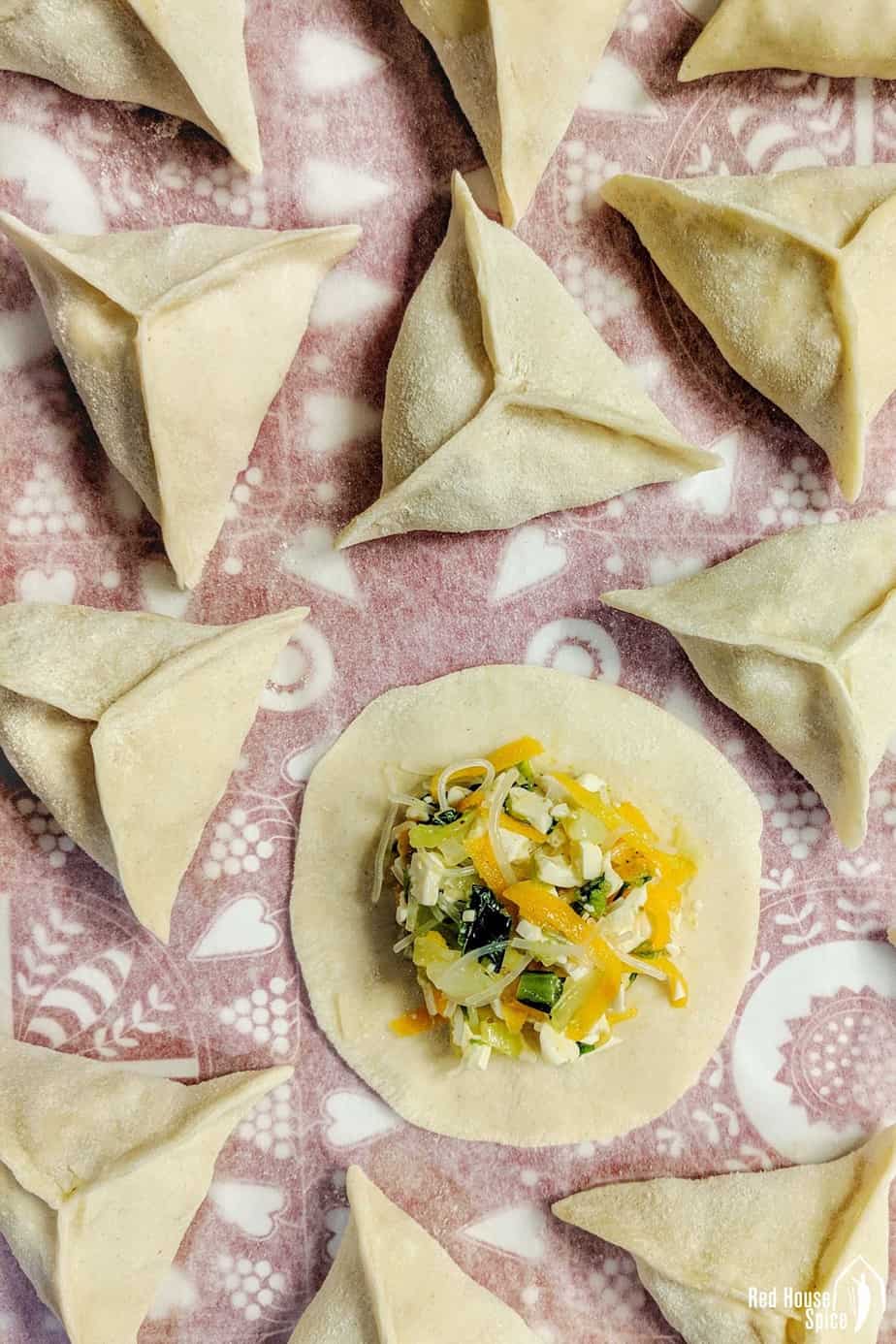 How to season the filling?

The regular seasoning for dumpling fillings includes salt, soy sauce, oyster sauce, ground Sichuan pepper / Chinese five-spice powder, white pepper, etc. A dash of sesame oil is always a good addition (but not so much that it overpowers the main flavour). Some people prefer adding a pinch of sugar to balance the saltiness.

Finely chopped spring onion and/or minced ginger are often added to the filling, especially for meat based ones. Some ingredients, such as Chinese chive, have a very strong aroma, therefore you wouldn’t need much seasoning. Some salt and a few drops of sesame oil are enough.

When you add salt to the filling, always consider if you are going to serve cooked dumplings with a dipping sauce or not. If you are including a dipping source then you will need to cut down on the salt. 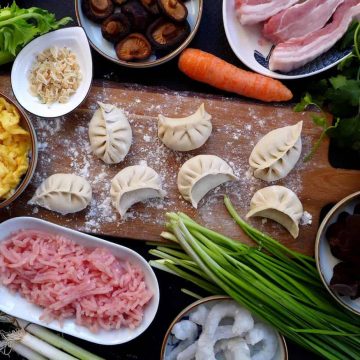 How to make great dumpling fillings

Measurement for the dried ingredients:
Cooked this recipe?Show me your dish or ask me questions @red.house.spice
Author: Wei Guo

Hope you have enjoyed reading my tips on dumpling fillings. For more dumpling recipes, have a look at the following posts