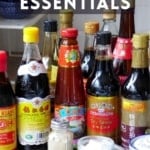 Building an authentic pantry is the first thing to do when starting to cook Chinese food. Here are 10 must-have condiments which can help you to create many classic dishes.

Chinese cuisine is a melting pot of fresh ingredients, seasonings, and spices from different regions with varied topography, climate, and historical backgrounds. It is no wonder that it’s one of the most famous cuisines in the world.

To cook Chinese food in the comfort of your kitchen, you need to start by building a collection of pantry items. In today’s post, I will be sharing 10 must-have condiments which are the backbone of authentic Chinese cooking.

They are the most common and accessible pantry items and you should be able to source them all in any Chinese shop. With them, you would be able to make many delicious dishes that reflect what good Chinese food really is and how simple it can be.

More importantly, once you’ve practised some dishes and understood how these condiments function, you’re free to improvise and create dishes using whatever is available in your kitchen.

Light soy sauce (Sheng Chou/生抽) is possibly one of the most used sauces in Chinese cooking. It is made primarily of fermented soybeans and has a dark brownish-red hue and water-like consistency. In most cases, when a recipe calls for soy sauce, this is what you should use.

The term light describes the colour of the sauce. It does not mean it’s a less salty version of its dark counterpart. In fact, it tastes saltier. A small splash of light soy sauce adds robust umami and salty flavour to any dish. It is widely used in dishes prepared in almost all types of cooking methods: stir-frying, steaming, braising, marinating, and seasoning cold dishes or as a dipping sauce.

It’s naturally vegan and is high in sodium. However, you can easily find low-sodium options in supermarkets. Since the regular version contains wheat or barley, it’s not gluten-free. But gluten-free soy sauce does exist. Tamari (Japanese soy sauce) is also a good gluten-free substitute.

Compared to the light version, dark soy sauce (Lao Chou/老抽) looks darker and thicker because it’s made with molasses or other sweetening agents. It has a more concentrated flavour and a caramel tone but is less salty. When used in dishes, it leaves a strong umami taste, a hint of sweetness and, most importantly, an appetizing dark glaze.

It is a vital ingredient for braised, stew dishes. When used in noodles, it gives them a glossy finish. You wouldn’t find it in uncooked dishes, such as salad, dipping sauces, etc.

Black rice vinegar is as essential to Chinese cooking as soy sauce but is not as popular outside China. It contributes to many classic dishes, such as salad dressings, noodles, stir-fries, soups, dipping sauces, etc.

It is made mainly of fermented black sticky rice and looks a little darker than light soy sauce. This fragrant condiment has an intriguing combination of salty, tangy, sweet, and smoky flavours that is very hard to substitute or replicate. Its acidity isn’t as sharp as that of white rice vinegar and is much more aromatic compared to other varieties.

My go-to variety is Chinkiang (Zhenjiang) vinegar (镇江香醋), and it’s the most accessible type outside China. You should be able to find it in any Chinese store (It’s under different brand names).

This rice-based condiment is vegan-friendly but is not necessarily gluten-free. Some brands use barley or millet when manufacturing these, so always check on package information before using.

An essential ingredient for preparing meat or fish in Chinese cooking, Shaoxing rice wine (绍兴酒) is made of fermented rice and glutinous rice (and a small amount of wheat so it’s not gluten-free). This clear, yellow-amber coloured wine has an average alcohol content of 14% and can sometimes be used as an alcoholic drink (usually served warm).

It has a rather complex taste with a strong aroma. Although having a hint of vinegary flavour, it can not be replaced by rice vinegar (remember it’s a type of wine, not vinegar). When a recipe requires a small amount, it can be replaced with dry sherry, or sometimes white wine.

Shaoxing wine works great in removing the unpleasant smell of raw meat or fish, making it a popular element in marinades. It also helps to create flavourful stews and braised dishes.

Hua Diao (花雕) is a high-quality variety of Shaoxing rice wine. Also, pay attention to its age if you’re keen to get the best flavour. Like other types of wine, it becomes better and better over time.

Please always check the nutrition label when purchasing Shaoxing rice wine. It should contain very little salt. For example, mine has 0.08g salt per 100ml wine. Some versions have a much higher percentage (e.g. 0.51g salt per 100ml wine). I suggest you avoid them.

Oyster Sauce (Hao You/蚝油) is a syrup-like dark condiment made from oyster extracts mixed with cornstarch, salt, sweeteners, etc. It has a pronounced umami flavour with a tinge of sweetness and saltiness.

Like soy sauce, it can be used in almost all types of Chinese dishes, such as stir-fries, stews, dumpling/bao fillings, etc. And it’s absolutely essential to Cantonese cuisine.

The brand of choice for good-quality oyster sauce is Lee Kum Kee (李锦记), the founder of which actually invented this delicious sauce by accident.

Obviously, it’s not vegan. However, you can find two plant-based alternatives: one is Vegetarian Oyster Flavored Sauce. The other uses the essence of shiitake mushrooms and is labelled as Vegetarian Stir-fry Sauce. They’re reasonable replications of the original! Also, there is gluten-free oyster sauce available.

It’s often found in cold appetisers, dips, marinade and dumpling fillings. When used in cooked dishes, most of the time it’s added at the end of the cooking process as a seasoning rather than as cooking oil (a few exceptions exist). Please feel free to improvise with it when a dish needs a flavour lift. A dash would be enough to do the wonders.

When purchasing, make sure to look for the version of dark yellow or warm amber colour, not the light coloured type which is made of raw seeds and doesn’t have a rich flavour and aroma. If you see it in Chinese shops or the Asian section of mainstream supermarkets, it’s highly likely the correct kind.

It‘s kind of a misnomer because five spice powder (五香粉) is not necessarily made of five spices. The base ingredients are star anise, cassia cinnamon, fennel seeds, and cloves. However, some other spices can also be added, like Sichuan pepper, white pepper, dried tangerine peel, etc.

There are many ways to incorporate it into Chinese dishes. You can use it as a dry rub, mix it into dumpling fillings or marinades, sprinkle it on layered buns, or add it to a broth.

Although commercial versions aren’t difficult to source, I highly recommend you make five spice powder from scratch yourself. It’s easy to prepare and tastes much better.

Sichuan pepper (Hua Jiao, 花椒) is a spice unique to Chinese cooking. Having a pinkish-red (or dark green), pimply appearance, it delivers an unusual but pleasant sensation of numbness and tingling (known as Má/麻). When paired with hot chilli, it makes food extra tasty and exciting.

It can be used whole or ground to a powder and it appears in dishes prepared in all types of cooking methods. Although a quintessential ingredient for Sichuan cuisine, it’s a must-have in households of other regions of China.

Unfortunately, there isn’t a substitute for Sichuan pepper. That said, you may still replace it in certain dishes with five spice powder, such as for dumpling fillings. To learn more, please read my Complete Guide to Sichuan Pepper.

While black pepper(白胡椒粉) is more common in Western cuisine, white pepper is more prevalent in Chinese cuisine. It adds a spicy kick to dishes and leaves a pleasant mild burn in the mouth and throat. Apart from the heat, it also provides an aroma that lifts the spirit of a dish.

Unlike many other Chinese ingredients, white pepper can be easily sourced in almost all shops. The ground version is more commonly used but the whole ones are good for braised or stew dishes.

Also known as corn flour, cornstarch (玉米淀粉) is a white powder made of finely milled corn. Strictly speaking, it’s not a condiment as it doesn’t have flavour on its own. But it’s a key ingredient to include in your Chinese pantry.

It’s used in Chinese cooking for three purposes. First, it is mixed with water or stock to make slurry used to thicken sauces and soups. Next, it creates coatings to make deep-fried dishes crunchier. Lastly, it is used for marinating sliced meat in a process called velveting which results in a tender and juicy texture.

Pure cornstarch is vegan and free of gluten. In most cases, it can be substituted with tapioca starch, potato starch or sweet potato starch.