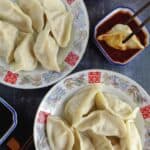 If you’ve found my blog through my Ultimate Dumpling Guide, you know how passionate I am about this delectable Chinese delicacy. Having published multiple dumpling posts, I’ve just realised that I haven’t shared a recipe for the classic pork dumplings (Zhu Rou Shui jiao/猪肉水饺) that my parents made regularly throughout my childhood.

It’s safe to say that boiled dumplings with pork and Napa cabbage filling are the most popular variety in Northern China where dumplings are a common dinner option. I absolutely love the clean taste of this type of dumplings. With a simple dipping sauce, they make a tasty & healthy all-in-one meal.

Having helped my parents to make this dish since I was a child, I know every detail of the recipe by heart. So I’ll break the entire process into easy-to-follow “bite-sized” sections to help you replicate the dish with confidence.

Here is a list of ingredients that you need to make the pork and cabbage filling (Precise measurements are provided in the recipe card at the end of the post).

As I’ve explained in my Dumpling Filling Guide, a good filling shouldn’t taste dry, yet it can’t be overly wet as it will make assembly impossible.

Have you tried making your own dumpling wrappers? Do you know it requires only all-purpose flour (plain flour) and water to make them? And they taste much better than shop-bought ones!

The flour-water ratio is about 2:1 by WEIGHT (not by volume). For example, to make a dough for about 30 wrappers, you’ll need

Making the dough is pretty straightforward. Combine flour and water then knead it into a smooth dough. You may achieve this either by hand or using a stand mixer with a dough hook.

Once the dough is done, cover it and leave to rest for at least 30 minutes. It’ll become softer, more stretchy thus ready to be rolled out into wrappers.

I use the traditional “roll and turn” method to do it efficiently (The video in the recipe card below demonstrates how). Also, wrappers rolled out this way are thinner on the edge and thicker in the middle.

I’ve introduced many folding techniques in previous dumpling posts (Ten Ways to Fold Dumplings being the most comprehensive one). Yet this time, another simple variety came to my mind.

This pattern may not look as fancy as the ones I introduced before. But if you had a chance to eat dumplings with a regular northern Chinese family, highly likely you’d see them in this form.

🛎 Tips: No matter how you pleat the dumplings, follow three rules for an optimal result:

Unlike other recipes, I won’t tell you how long it takes to boil dumplings. Instead, follow the traditional trick of “Dian Shui/点水” (meaning adding water) to cook them without counting the time. Here is how:

I guess you might want to ask: why add cold water three times? Well, it helps to avoid vigorous boiling. The wrappers and filling can be cooked evenly this way. Also, the wrappers have less chance of tearing or being overcooked therefore achieving a pleasantly chewy texture.

🛎 Tip: If you don’t fancy boiling, you may either pan-fry or steam them following instructions explained in my post Three Ways to Cook Dumplings.

Serve with a sauce

Don’t forget to prepare some dipping sauce for your boiled pork dumplings. Our family’s go-to quick solution is a simple mixture of Chinese black rice vinegar and homemade chili oil. Pungent and aromatic, it’ll take your dumpling meal to the next level.

You can find more sauce ideas in my post Six Dumpling Sauces which includes non-spicy versions and a dumpling soup seasoning recipe.

Right after they’re assembled, lay on a tray in a single layer (dusted with flour or lined with parchment paper) then freeze. Once completely frozen, transfer them into airtight bags/containers. Store in the freezer for up to three months.

If you have any leftover cooked dumplings, store them in an airtight bag/container in the fridge for up to 2 days. Fry them in a little oil to reheat.

It has warmed my heart writing this family recipe and photographing these dumplings served in these “double-happiness/囍” plates which we have used since my childhood. Hope you enjoy this post too. 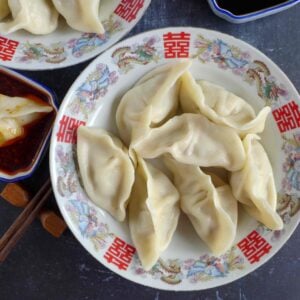 1. If using a cup to measure, you’ll need to sift the flour first then level it properly. Please be aware that measuring flour by cups is less accurate than measuring by weight so use a scale when possible. 2. The flour-water ratio may vary depending on the brand of your flour, the humidity of your kitchen, etc. Adjust a little if necessary. The initial dough should be medium-firm and it will become softer after resting. 3. Dried shrimp can be replaced by dried scallops. Follow the same instruction to prepare.