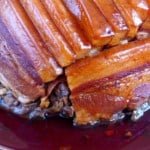 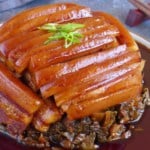 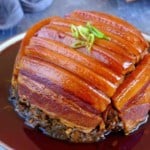 What is Mei Cai Kou Rou

Like Lion’s Head Meatballs, Mei Cai Kou Rou (梅菜扣肉) is a banquet-style dish that brings any special food gathering to the next level.

One of the most popular Chinese New Year dishes, it consists of slices of pork belly steamed to a melt-in-the-mouth texture and served over a bed of richly flavored preserved mustard (Known as Mei Cai/梅菜).

Another highlight is that this dish is presented in a neatly packed, upside-down bowl shape. This eye-catching look makes it a perfect centerpiece for a feast.

There are many variations of Mei Cai Kou Rou across different regions of China. The general cooking method and appearance are similar, but they differ in seasonings. Some use soy sauce to provide the key flavor, while others add fermented ingredients like Fu Ru (fermented bean curd), spicy condiments like Doubanjiang (like what I cooked for a fund-raising supper club in London), etc.

This recipe uses a few common Chinese condiments making it very accessible. Its neutral flavor suits young and old. That said, please feel free to add your own twists to alter the taste.

Like how I alter the traditional recipe for Dim Sum Chicken Feet, I skip the deep-frying process which leads to hot oil splashes and the unnecessary addition of fat. Without the “tiger skin” look, the dish tastes equally delicious.

Before I explain the recipe in detail, here are some top tips to bear in mind:

You’ll need a block of skin-on pork belly which has a certain thickness. Choose a leaner piece when possible (You’d need some fat for this dish so I don’t recommend you use other cuts of pork).

If the butcher didn’t remove all the hair on the skin, you can burn it off by pressing the skin over the surface of a very hot wok/skillet.

Mei Cai/梅菜 (or Mei Gan Cai/梅干菜) refers to preserved mustard which is used in many regional cuisines of China. It comes in different forms and saltiness.

The dried one from Shanghai and Jiangnan cuisine requires rehydration. The Cantonese version is fresh and can be consumed directly (I still soak it though to reduce the saltiness). Also, the former has a chewier texture while the latter taste crunchier.

Both types work well for this dish. I used the Cantonese version for shooting this recipe.

You’ll need garlic, ginger, star anise and Chinese cinnamon (aka cassia cinnamon). I also add a few dried chilies which give the dish a mild hint of spiciness. Skip them if you have a very low tolerance for hot food.

The cooking procedure can be broken down into three parts:

Even though the recipe is written in this sequence, you should multitask during the first two sessions to be time efficient. For example, while waiting for the pork to simmer, soak and braise the Mei Cai.

Put a block of pork belly into a pot/saucepan filled with cold water. Add scallions and ginger. Bring the water to a boil then turn the heat to low. Leave to gently simmer for 45 minutes.

Turn off the heat. Let the pork sit for a further 30 minutes. Then remove from the pot. Rub a layer of dark soy sauce over the skin while it’s still hot. This is to give it an appetizing brown look.

Once the pork belly cools and becomes firmer, use a sharp knife to cut it into slices. I like them to be around ¼ inch/0.7cm thick. If too thin, they fall apart easily after steaming. If too thick, it’ll take longer to cook them to a melt-in-the-mouth texture.

No matter which type of Mei Cai you use, rinse it under running water to remove any salt and dirt on the surface. Then soak it in plenty of water to either rehydrate (for the dried version) or to reduce the saltiness.

Then bite a small piece to test the saltiness. If it still tastes overly salty, change the soaking water and leave for longer.

Use your hands to squeeze the Mei Cai to remove the water as much as possible. Then chop it into small pieces.

Fry minced garlic, ginger and spices in a little oil until fragrant (do not burn). Add the chopped Mei Cai, dark soy sauce, sesame oil, white pepper, sugar and some water. Cover and leave to braise for 5 minutes or so.

Taste the Mei Cai and add a little light soy sauce if you think it needs more saltiness (at this stage, it can be a little on the salty side).

Once both the pork belly and Mei Cai are prepared, you’re ready to combine and steam them together.

Choose a large, deep bowl. Neatly lay the pork slice (with the skin side facing down) one by one over the bottom of the bowl. Use the extra pieces to fill the sides. Then top with the fried Mei Cai. Make sure to also pour in any leftover marinade and cooking liquid from the braised Mei Cai.

Place the bowl into a steamer basket, or over a steamer rack. Add water to the wok/pot that you use for steaming. Bring the water to a full boil then turn the heat to medium-low. Leave to steam, covered with a lid, for about 2 hours (Don’t forget to check the water level every half an hour in case it dries out).

The last step is to transfer the dish neatly onto a serving plate. Like how you deal with steamed Eight Treasure Rice Pudding, put a plate over the bowl then hold both tightly and quickly flip over so the content in the bowl lands on the plate.

You may find the flipping a little scary. Follow these tips:

Enjoy Mei Cai Kou Rou while it’s warm with steamed rice. If serving it as a centerpiece of a meal, pair it with dishes featuring other types of ingredients. For example, Steamed Fish, Ginger Chicken, Garlic Bok Choy, Mushroom Stir-fry, etc.

If you have any leftovers, store them in the fridge for up to 3 days. Steam for 10 minutes until piping hot.

This is a great dish to make in big batches. Chinese home cooks would gift their family and friends with bowls of homemade Mei Cai Kou Rou for special occasions like New Year, Mid-Autumn Festival, Dragon Boat festival, etc.

Looking for more ideas for special feasts? Here are some popular recipes:

Love this recipe? Please leave a 5-star 🌟🌟🌟🌟🌟 rating in the recipe card below & if you REALLY like it, consider leaving a comment as well! 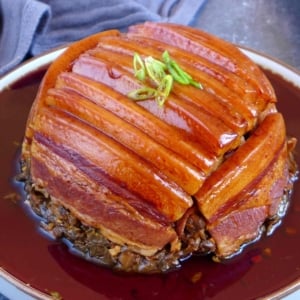 For the pork belly

For the Mei Cai

1. You can use either ready-to-eat Mei Cai or dried Mei Cai. Both require soaking to either reduce the saltiness or rehydrate the vegetable. 2. Since different Mei Cai come with various levels of saltiness, it’s important to taste before adding any light soy sauce.
Cooked this recipe?Show me your dish or ask me questions @red.house.spice