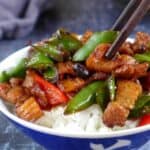 What is Hunan pork

Originating from Hunan province in China, Hunan pork stir fry is known as Xiao Chao Rou/小炒肉 meaning “small stir-fried pork”. It’s considered “small” since it comes from a humble, everyday cooking background, but its flavour is anything but small.

The most valued cut of pork in Chinese cuisine, pork belly offers wonderful taste thanks to its high fat content. Yet, if prepared properly, it doesn’t taste greasy at all.

Unlike other classic dishes, such as braised pork belly, twice-cooked pork or Chinese pork burger, when preparing Hunan pork stir-fry you’ll need to trim off the skin as quick stir-frying is insufficient to cook the skin through.

Cut the meat into thin slices. Sharpening your knife will make it a lot easier. Or, harden the meat a little in the freezer for an hour or so before slicing.

It’s worth noting that for this stir-fry you don’t need to marinate the pork with cornstarch, rice wine, etc.

Hunan pork may not look as spicy as Sichuan style dishes which use generous amounts of dried chili or chili oil, such as Sichuan boiled fish, Mouth-watering chicken etc. However, the authentic version of this dish is among the hottest dishes in Chinese cuisine.

The heat comes from a local variety of chili pepper called Luo Xuan Jiao/螺旋椒, a type of wrinkly green pepper that has a very high heat level.

For shooting today’s recipe, I used a combination of green and red chilies available in my local supermarket. Please feel free to choose whatever type you can find. If you’re used to spicy food, make sure to use a hot variety to fully appreciate the beauty of this classic dish.

Available in most Chinese/Asian stores, they usually come in two forms: dried or in a salty brine. I always prefer the former which has a less salty but more complex taste. Before stir-frying, rinse the dried beans under running water then lay them on kitchen paper to dry.

If you have trouble sourcing this ingredient, use black bean sauce as a substitute. The popular Laoganma black bean chili sauce (老干妈风味豆豉) would work well.

Both light and dark soy sauce are called for in Hunan pork. The former provides an aromatic saltiness to the dish whereas the latter adds an appealing brown shine and a hint of sweetness.

Heat up a wok until it smokes. Add about 2 teaspoons of oil. Then put in sliced pork belly (about 200g/7oz). Sear over medium heat. Stir from time to time until it browns a little and some fat has been extracted. Transfer the meat to a plate leaving the oil in the wok.

⭐️ Tip: I use a traditional carbon steel wok for stir-fries. If you’re using a non-stick wok, do not heat it up empty. Instead, pour in the oil as you turn on the heat. Add the pork when the oil is hot.

Turn the heat up to high then add chili pepper (about 150g/5oz, deseeded and cut in chunks) and 5 roughly crushed garlic cloves. Stir fry until the chili wilts a little and are slightly charred.

⭐️ Tip: If your chili is on the hot side, the frying process would make the air “spicy”. So I suggest you ventilate the kitchen well.

Put the pork back into the wok, along with 1 tablespoon of fermented black bean (rinsed and dried), 1 teaspoon of light soy sauce and ½ teaspoon of dark soy sauce. Stir fry for 30 seconds or so to evenly distribute the seasoning.

⭐️ Tip: This dish is supposed to look “dry” instead of saucy. With the quantity of soy sauce suggested, the saltiness is just right for my liking. Please feel free to add a pinch of salt if you want it saltier.

Other quick stir-fries to try

Here are some of the quick Chinese stir-fries that my readers love to cook: 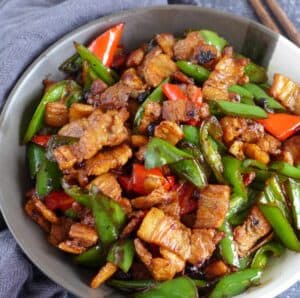 1. Fermented black beans, known as Dou Chi/豆豉 in Chinese, can be found in Chinese stores. The dried version is preferable (instead of the ones in salty brine). Read my post “Fermented Black Beans” for more information. 2. If using a non-stick wok, do not heat it up empty. Instead, pour in the oil as you turn on the heat. Add the pork when the oil becomes hot.