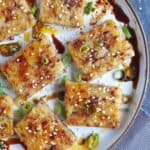 A popular dim sum delicacy, turnip cake stands out for its fragrant, umami taste and soft, gooey texture. Follow my recipe and tutorial video to make it at home with ease!

What is Chinese turnip cake

Turnip cake, known as Lo Bak Go in Cantonese and Luo Bo Gao/萝卜糕 in Mandarin, is a classic dim sum dish typically served in Cantonese Yum Cha restaurants. For those who haven’t tasted it or cooked it themselves, I’d like to clarify some confusion caused by the popular English translation of its name. 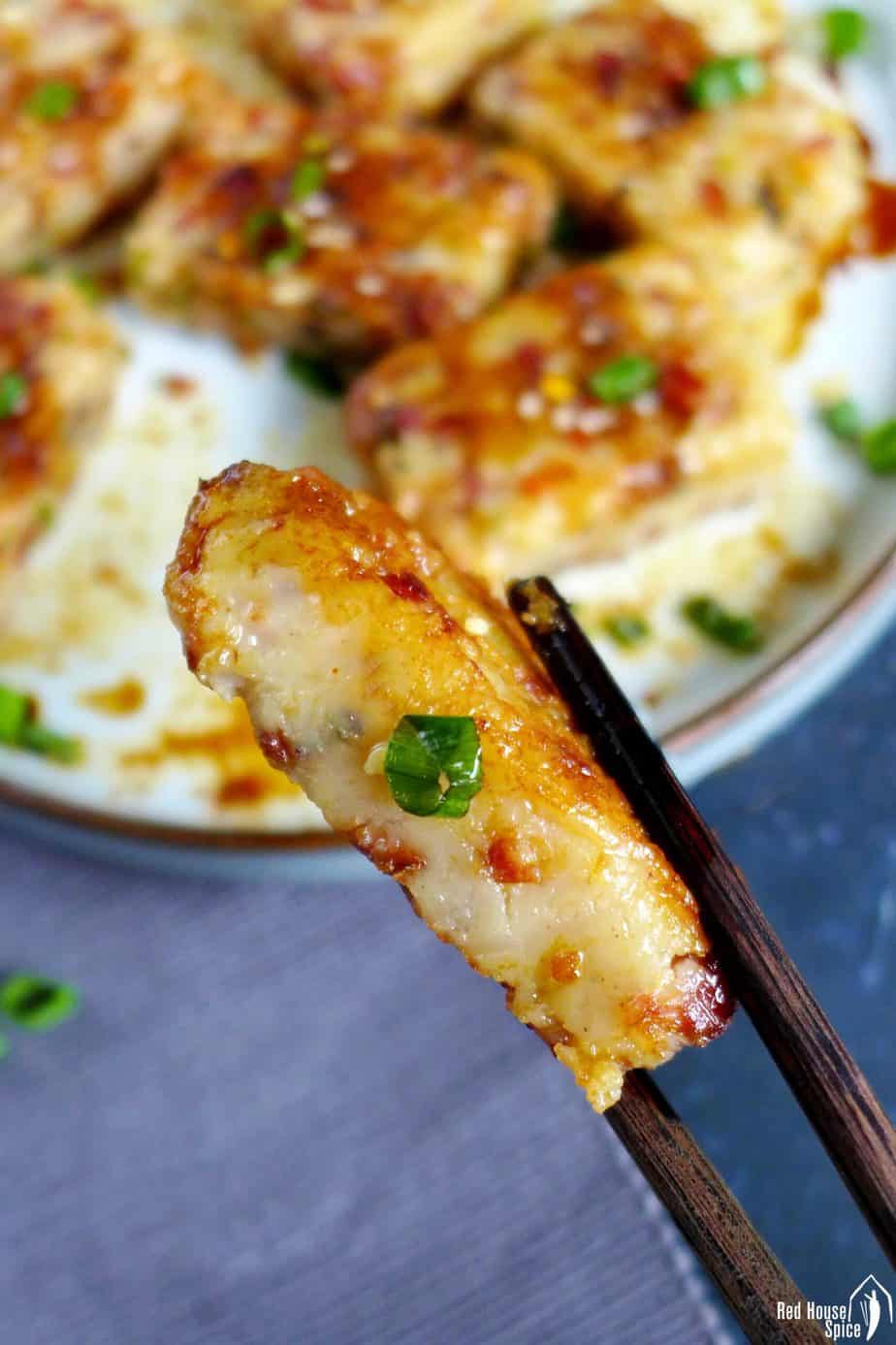 What ingredients do you need

Here are the ingredients you’d need to make authentic turnip cake. I classify them into three groups:

As I’ve explained in the section above, you’d need daikon radish, instead of turnip, for Chinese turnip cake. Choose the radish that looks smooth on the surface and feels heavy. Avoid the wrinkled, light ones which aren’t fresh enough (Their flesh tends to be less dense and the taste is lacking in sweetness and sharpness). 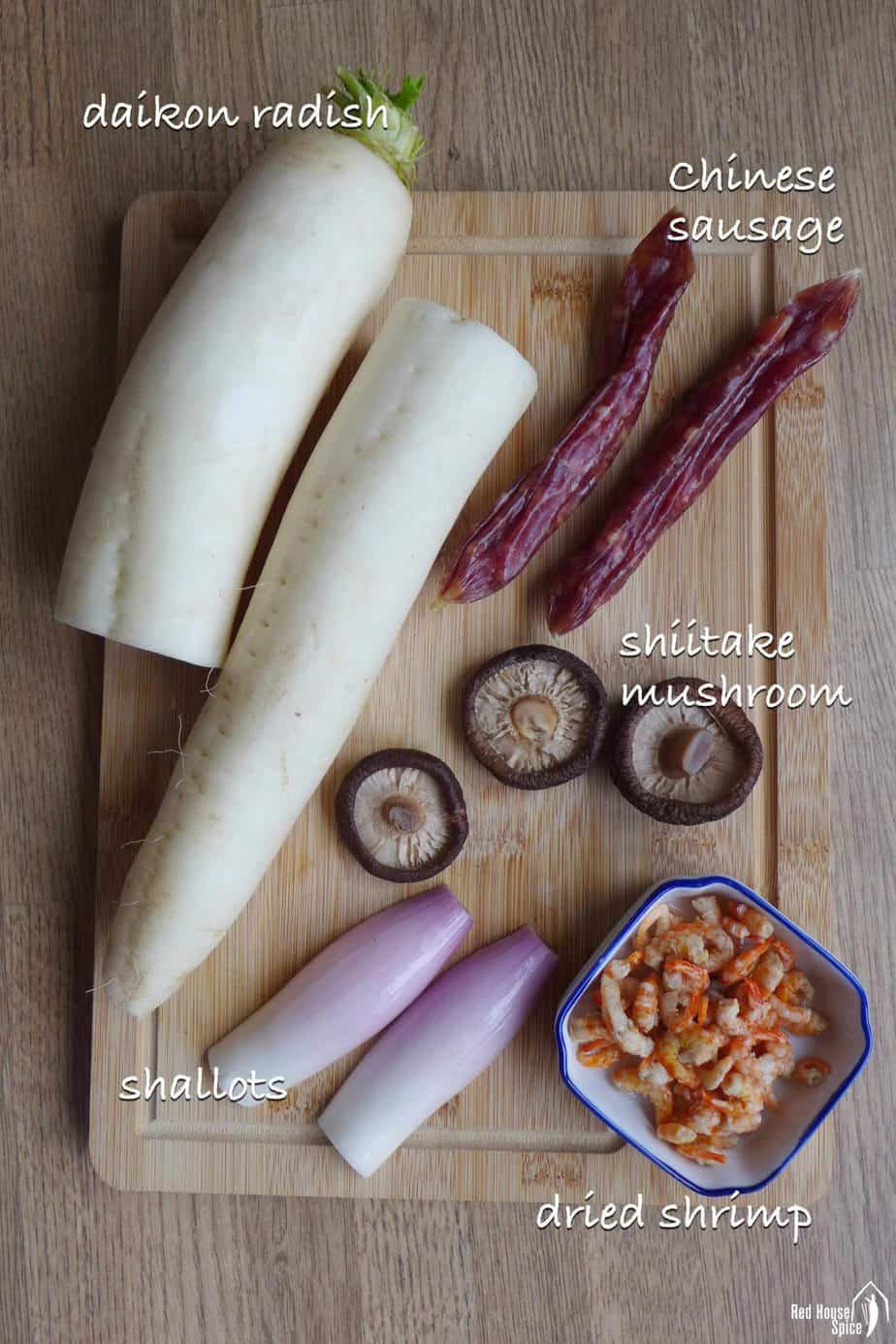 They’re chopped small and mixed with the radish to delivery savoury, umami and aromatic flavours.

Rice flour (粘米粉) and corn starch are used to help combine all the loose ingredients to form a cake that doesn’t fall apart. They also contribute to the springy texture of the cake.

Summary of the cooking procedure

With all the ingredients to hand, let’s talk about the sequence and methods needed to turn them into a delicious turnip cake. Here is a summary before I provide detailed instructions on each step.

First, peel the radish with a vegetable peeler. Then shred it in one of three ways: grate with a hand grater (with big holes), shred in a food processor or simply cut it into thin strips with a knife.

Cook the shredded radish with a little liquid until softened. You could just use water but I have a trick to make the cake extra flavourful: As I mentioned earlier, the dried shrimp and shiitake mushroom need to be rehydrated beforehand. Don’t throw away the water in which they are soaked. Instead, use it to cook the radish. It makes such a difference in flavour.

After simmering for about 5 minutes, the radish becomes wilted and you’ll see some liquid has been extracted from it. Drain the radish very well using a sieve. Again, don’t discard the flavoursome liquid which will be mixed with the starchy ingredients later on.

While you’re waiting for the radish to be cooked, mince all the tasty and salty ingredients: Chinese sausage, shallots, dried shrimp and mushroom. Use a food processor if available as it’s quite time-consuming. Remember to cut the sausage into thin slices before adding it to the processor as it’s hard to mince it in chunks.

In a little oil, firstly fry shallots until golden. Add Chinese sausage and fry until some fat is extracted. Stir in the shrimp and mushroom. Fry for a further minute. Then turn off the heat (This is very important). Add the cooked radish, oyster sauce and ground white pepper. Stir well to evenly distribute all the ingredients.

By now, the liquid (in which the radish was cooked) should be cool enough to mix with rice flour and corn starch. It’s crucial that you don’t add the starchy ingredients into hot liquid (it’s ok if it feels warm). Otherwise, you’ll get a sticky mess that’s difficult to mix with the radish.

Once the starch is completely dissolved, pour it onto the radish. Mix well then turn the heat back on to low. Stir constantly while heating. You’ll soon see the liquid disappearing and the mixture becomes a pretty solid block.

I use a 20cm round cake tin to hold the radish mixture. A square/rectangle container will work well too (or use two small ones). Don’t forget to grease it with a thin layer of oil before you pour in the radish mixture. Level the surface with a spatula.

For steaming, you can either place the tin/container over a steamer rack or into a steamer basket as I do. Leave to steam for 50 mins. You might need to top up the water in case it dries out. So set an alarm to remind yourself to check the water level halfway through.

After steaming, the cake has a more transparent look. Don’t worry if you notice the surface a little wet. It will dry out soon. Leave it to cool naturally inside the tin/container.

Once the cake is completely cool, slice off the portion that you’d like to serve on the day. Cut it into rectangle pieces that are 1-1.5 cm thick. Heat up a little oil in a frying pan. Lay in the cake pieces and fry until both sides become golden.

Now it’s time to serve your homemade turnip cake! For this part, you’re free to improvise without following a recipe. Enjoy it on its own or with a sauce of your choice for extra flavour. Here are my favourite accompaniments :

If you have trouble sourcing sweet soy sauce, make your own! In a saucepan, heat up light soy sauce, dark soy sauce, oyster sauce, sugar and water (ratio 1:1:1:2:2) until the sugar is fully dissolved. 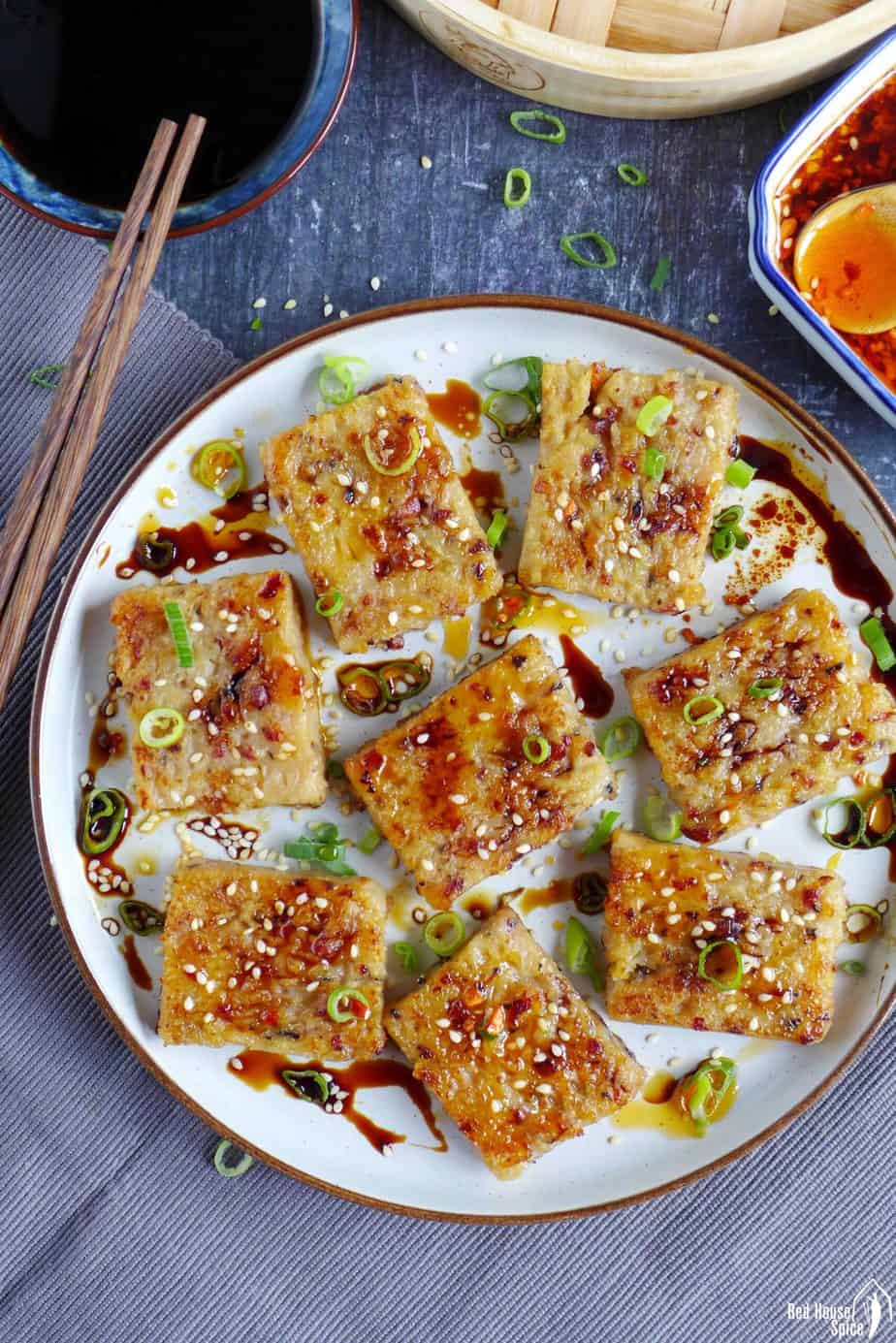 How to store leftovers

For the quantity suggested in my recipe, your turnip cake would be enough for about 8 servings (no point to make just a tiny one for all this effort, right?). The great news is that it freezes well and you can pan-fried it without defrosting. Here is what you need to do:

Other dim sum dishes on the blog 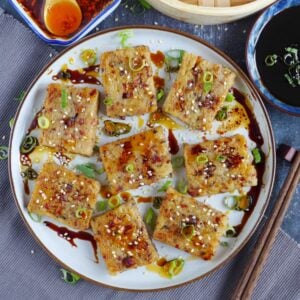 Combine with the starchy liquid

1. Traditional turnip cake recipe also calls for dried scallop which delivers similar flavour. You can use both dried shrimp and dried scallop or either of them alone (the total quantity remains the same). 2. Don’t be confused by the popular English translation of its name, turnip cake is not made of turnip but daikon radish, aka white radish, Chinese radish or mooli. 3. You can find sweet soy sauce in Chinese/Asian stores. Alternatively, you can make it yourself by heating up a mixture of light soy sauce, dark soy sauce, oyster sauce, sugar and water (ratio 1:1:1:2:2) until the sugar is fully dissolved.

Serving: 1 serving | Calories: 204 kcal
Cooked this recipe?Show me your dish or ask me questions @red.house.spice