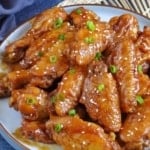 What are Coca-Cola chicken wings?

Essentially, they are chicken wings braised in a broth made of Coca-Cola, soy sauce, aromatics and spices. When reduced down at the end of the cooking process, the liquid becomes thick, shiny and sticky. It coats the wings with an appetising glaze that has a balanced sweet-savoury and aromatic taste.

I can’t find much information on how this strange-sounding dish entered the world of Chinese cuisine. But I vividly remember the trend of making it in the 1990s. Back then, as someone who seldom got involved in the kitchen, I cooked it for my roommates. To my surprise, it was a huge success.

If you’re looking for a dish that’s finger-licking good yet easy to make, this recipe is the one to try!

Chicken wings or other cuts

Although this dish was originally popularised using chicken wings, please feel free to substitute with chicken drumsticks, thighs (skin on), etc. In this case, score them a few times for better absorption of flavour. Also, increase the braising time by 5 minutes or so.

Like how I make Braised Peppercorn Chicken Wings, I cut the wings at their joints to separate each one into three parts. This way they can pack up tightly and immerse in the cooking liquid. Also, it makes eating less messy.

Use regular Coke or Pepsi

Although named after Coca-Cola, this dish can be made with Pepsi too. There won’t be any difference in taste.

No matter which brand you use, make sure you use the original version (not diet) as its sugar content is a key element of the dish. In classic Chinese braised meat dishes, such as Red Braised Pork Belly, rock sugar is used to create a caramel-like sweetness, as well as a beautiful shine. Coca-Cola in today’s recipe plays the same role.

Diet coke or diet Pepsi isn’t suitable as it contains artificial sweetener instead of sugar. According to FDA, aspartame, the sweetener used in diet soda drinks, “is not heat stable and loses its sweetness when heated”.

Other ingredients you need

I use a wok to cook this dish as its bowl shape allows most meat to be immersed in the cooking liquid. If unavailable, use a small pot or a saucepan in which the chicken pieces nestle nicely.

Over medium heat, fry the chicken pieces, ideally in a single layer, in a little oil to brown the skin. You may need to do so in two batches in a pot.

🛎 TIP: Apart from flipping over to cook the other side, do not move the chicken too frequently. This is to prevent sticking.

Add Coca-cola (or Pepsi) to the chicken, along with all the condiments, aromatics and spices.

Bring the liquid to a full boil then leave to braise for about 15 minutes over medium heat with a lid on. Flip over the chicken pieces halfway through.

🛎 TIP: You’d need to boil off some of the water during this step, so keep it boiling, not too vigorously, but not a gentle simmer either.

Take the lid off. Use chopsticks to pick out the ginger, scallions and spices. Turn the heat up to the highest. Boil the broth vigorously.

In about 8 to 10 minutes, the liquid will be significantly reduced. When it’s thick enough to coat the spatula, give the chicken pieces a final toss then remove from the heat.

🛎 TIP: You shouldn’t wait until the sauce becomes too thick. Note that it will continue thickening as it cools down. So if it looks a little too runny for your liking, you should stop cooking. By the time you serve it on the table, the consistency would be just right.

Before serving, sprinkle some sesame seeds and chopped scallions as a garnish. These Coca-Cola chicken wings make a great centrepiece of a dinner accompanied by vegetable dishes and steamed rice.

Also, I enjoy munching those wings as finger food as they become more gelatinous at room temperature. You can make a big batch in advance and store them in the fridge. Simply bring them back to room temperature and serve them at parties. I’m sure they’ll be loved by your guests!

Looking for more ideas to cook chicken or duck? Check out these recipes:

1. You may also use this recipe to cook chicken drumsticks or chicken thighs. The same method applies. Increase the braising time by 5 minutes or so as they are larger. 2. Diet Coca-cola or diet Pepsi are not suitable for this recipe. Aspartame, the artificial sweetener used in them, is sensitive to heat thus it’s not recommended for cooking.

Serving: 1 serving | Calories: 499 kcal
Cooked this recipe?Show me your dish or ask me questions @red.house.spice