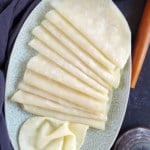 Thin, soft and pliable, Peking duck pancakes can be easily made from scratch. They’re perfect wraps for any fillings of your choice.

An essential element of the classic Peking duck meal, Peking duck pancakes are known as Chun Bing/春饼 meaning spring pancakes as they’re a traditional food for celebrating the beginning of Spring (Li Chun, 立春). Sometimes they might be referred to as Mandarin pancakes.

Made with wheat flour and water, Peking duck pancakes are cooked either in a steamer or a pan. Compared to the popular tortilla, they are much thinner and have a smoother appearance. Apart from Peking duck, many other Chinese dishes, such as Moo Shu Pork, Bean Sprout Stir-fry, etc., can be enjoyed inside these pancakes.

This recipe introduces an efficient method to make them in a frying pan (without any oil). It also includes many useful tips to help you succeed. A tutorial video is placed inside the recipe card at the end of the post.

Peking duck pancakes are soft, moist and very thin. To achieve the right texture, you need to get the dough right.

Once the dough is formed, coat it with a little oil and leave to rest for 30 minutes in a bowl covered with a lid.

Afterwards, divide the dough into small pieces and shape them into round discs. Try your best to divide them as equally as possible. This will make the next step neat and smooth.

Roll and cook two pancakes at a time

Once the dough pieces are ready, it takes two simple steps to turn them into Peking duck pancakes: flatten with a rolling pin until very thin, then briefly cook in a pan without any oil.

To make rolling easier and speed up the process, apply the “double pancake” method and follow a good workflow. Here are the procedures and tips (see tutorial video below for reference):

Once you finish cooking, gently separate all the double-layered pancakes into single pieces. This needs to be done while they’re still warm. If you do so when they’ve gone cold, it’ll become impossible to separate them neatly.

What to serve with

Not only are these pancakes essential to a Peking duck meal, they’re also served with many other dishes in Chinese households. As I mentioned earlier, they’re a festive food to eat on Li Chun Day. The typical fillings include raw ingredients like cucumber, scallions, pickled vegetables, and stir-fried dishes made with meat, egg, tofu, vegetables, etc. Each diner picks up what he/she wants to wrap in the pancakes.

Here are a few dishes that would make delicious fillings:

How to store and reheat

You may store leftover Peking duck pancakes in air-tight bags in the fridge for up to 3 days or in the freezer for 1 month or so. They can be reheated in two ways. 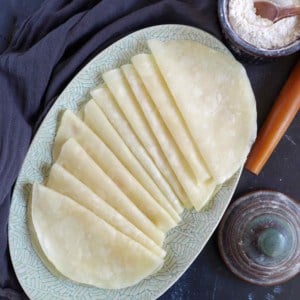 Make and rest the dough

Roll and cook the pancakes