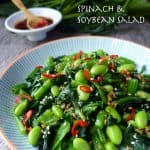 An earthy, refreshing dish loaded with nutrients, this spinach salad is seasoned with a simple yet flavourful Chinese ginger dressing.

When it comes to vegetable, what I miss most is all kinds of Chinese leafy green vegetables which are not easily accessible in Europe. Luckily I can always bring a nice bunch of spinach home whenever I crave something green on the table. I adore its lovely earthy taste and its versatility. Recently, in our Red House,  spinach salad with ginger dressing has been a regular favourite.

What is savoy spinach

The type of spinach used in Chinese dishes is usually savoy spinach, a variety which has dark green, wrinkled leaves (unlike baby spinach for example which has flat and smooth leaves). I prefer savoy spinach for its stronger “spinach” taste: earthy, nutty and slightly bitter.

If you are familiar with savoy spinach, you might have also noticed that the stem has a hint of sweetness which I like very much. Speaking of stem, I’d like to share one of the fun memories from my childhood. My parents often cooked spinach and egg soup and I had great fun sipping the soup with the stem of the spinach. Because it’s hollow in the middle so it worked well as a straw!

Let’s go back to the salad. Yes, I use savoy spinach for my spinach and soybean salad. Different from baby spinach, it need to be blanched in boiling water. It’s not recommended to eat raw savoy spinach (unpleasant flavour and texture), but the quick blanching process will bring out the best flavour.

After cooling the blanched spinach under running water, don’t forget to squeeze out as much water as possible before adding it to the salad bowl. Otherwise the excess water will dilute the dressing thus making the flavour less intense.

I like adding fresh green soybeans (aka edamame) to this healthy, refreshing salad. They give the dish another taste, another texture and yet another shade of green. You need to blanch soybeans too. It takes only a couple of minutes to cook.

The aroma of fresh ginger works very well for this dish. It’s better to mix the dressing (minced ginger, soy sauce, vinegar, sesame oil and honey)  before preparing the vegetables.

This will allow enough time for the different flavours to combine. For a nice presentation as well as a richer taste, you can garnish the dish with toasted sesame seed and fresh chilli before serving.

Cooked this recipe?Show me your dish or ask me questions @red.house.spice