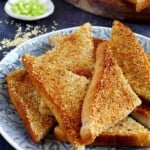 Deliciously seasoned shrimp paste spread over toast then fried to perfection, sesame shrimp toast can be easily made in two ways.

Although simple in appearance, shrimp toast offers a set of pleasurable flavours: natural sweetness from the shrimp, saltiness from the seasoning and a nutty aroma from the sesame seeds. The texture is great too: crunchy outside but both soft (from the toast) and springy (from the shrimp) inside. So satisfying to eat!

It’s extremely simple to make at home! Spread a layer of shrimp paste (minced raw shrimp with classic Chinese seasonings) over a piece of toast then sprinkle with sesame seeds. Traditionally deep-fried to golden brown, it can also be pan-fried or air-fried, the two methods I’m introducing in today’s recipe.

🛎 Tips:
Shrimp and prawns are interchangeable for this recipe. If you’re curious as I once was, read this article on The Differences Between Shrimp and Prawns.

Although the traditional recipes call for regular slices of toast, please feel free to use other types of bread, such as halved baguettes, sliced sourdough bread, etc.

Usually, Chinese chefs would use a cleaver to mince the shrimp manually, then mix it with other ingredients. If you have a blender or food processor, just blend shrimp, egg white and seasonings until a smooth, sticky paste forms. Easy peasy!

🛎 Tip: To get an even texture, I suggest you periodically stop the motor and use a spatula to scrape any food down from the side.

Use a knife or a small spatula to spread a layer of shrimp paste onto a piece of toast. Make sure it reaches all edges. There isn’t a set rule on how thick the paste should be. As a reference, I cover six slices of toast with the paste made of 225g (½ lb) of shrimp.

Please note that the restaurant version of shrimp toast usually uses crustless toast (all four edges trimmed off). I prefer having the crust on as I don’t like the idea of wasting food.

Put sesame seeds onto a flat plate. Place the toast over with the shrimp paste side facing down. Gently press to ensure the seeds stick well to the paste.

Cut the toast diagonally twice to make four triangular pieces (This isn’t a compulsory shape though).

🛎 Tips: You may make the shrimp paste in advance and store it in the fridge for later use. But I suggest you don’t spread it over the toast until you’re ready to cook as the moisture from the paste would make the toast thinner.

Although shrimp toast is traditionally a deep-fried food, I’m introducing two healthier alternative methods in this recipe. You may either shallow-fry them in a pan or cook them in an air fryer.

Heat up oil in a frying pan/skillet over medium heat. You don’t need a lot of oil. Just make sure it covers the surface. Use a sesame seed to test the temperature. If it spins around immediately, it’s time to put in the toast. Fry the sesame side first until it turns golden. Flip over to brown the other side.

Preheat your air fryer at 240°C/460°F for 3 mins. While waiting, brush a thin layer of oil over both sides of the toast. Place in a single layer over the crisper tray with the sesame side facing up. Cook for around 3 mins until it browns (As shown in the image above, I cooked a whole piece. You may cut it into triangles too).

🛎 Tips: If you want to try the traditional deep-frying method, heat up the oil to 190°C/375°F then slide in the toast. Frying at a lower temperature would result in a greasier taste.

Looking for more dishes using shrimp? Check out these recipes: 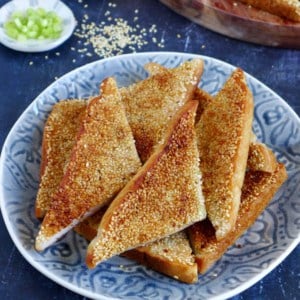 Serving: 1 serving | Calories: 369 kcal
Cooked this recipe?Show me your dish or ask me questions @red.house.spice