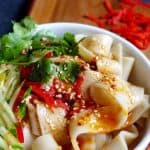 Springy noodles seasoned with a tangy, spicy, savoury sauce, Liang Pi (Cold skin noodles) is one of the most popular street foods in the north-west of China. 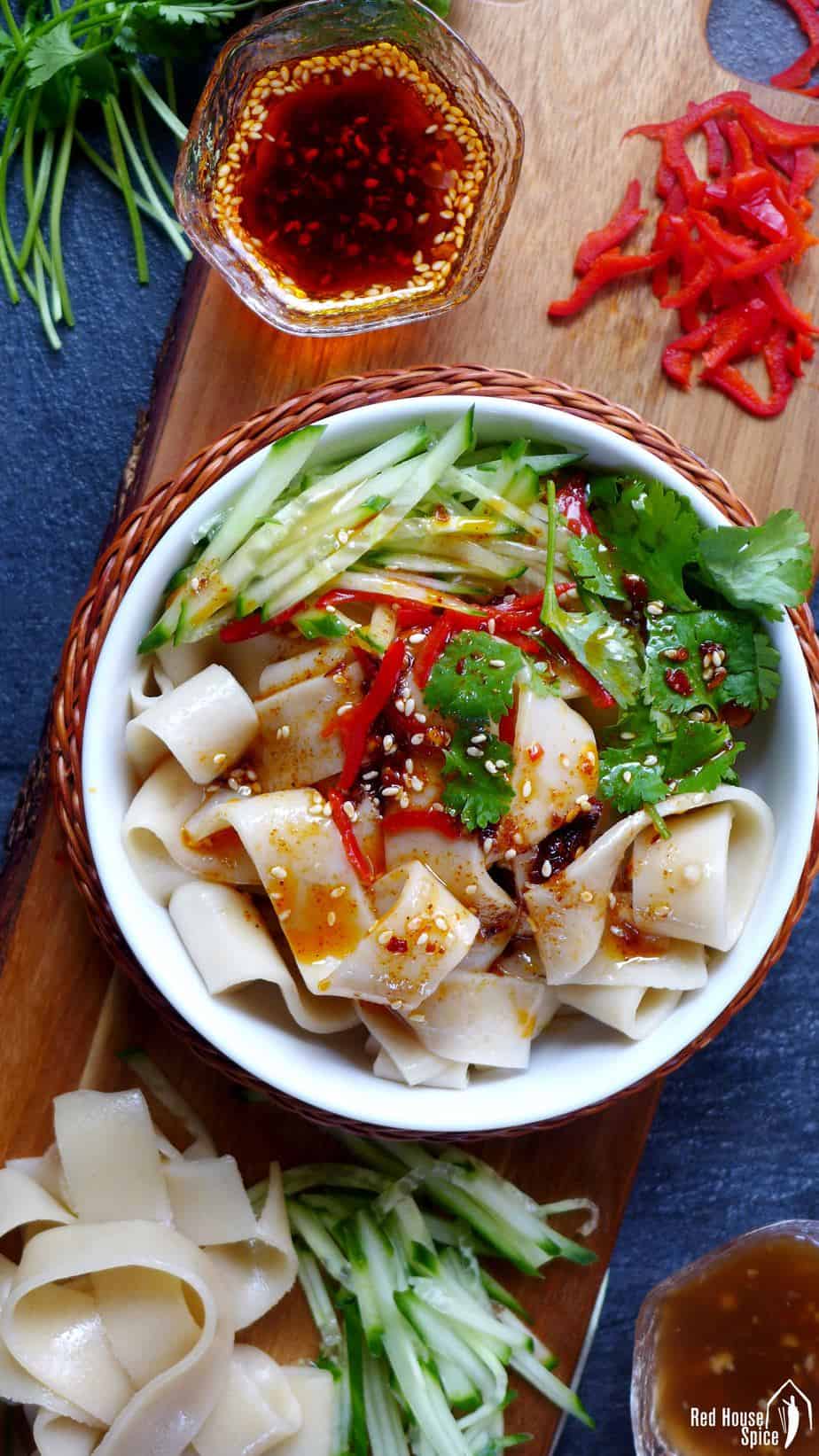 A few days ago, I chatted with my friend Heddi (blogger of Cuisine Helvetica) about childhood snacks. Her memories involve lot of sweet treats, whereas mine are all about savoury food.

I told her that after school I often ran to a little street food stall with my friends and spent my pocket money on a bowl of Liang Pi (凉皮, aka cold skin noodles), a tangy, savoury, cold dish available all year round in my hometown. It was very satisfying!

Although translated as “cold skin noodles” in English, Liang Pi is very different from regular noodles. The mixture of flour and water is steamed into a thin “pancake” then cut into strips. Springy and elastic, Liang Pi has a very unique and appealing texture. 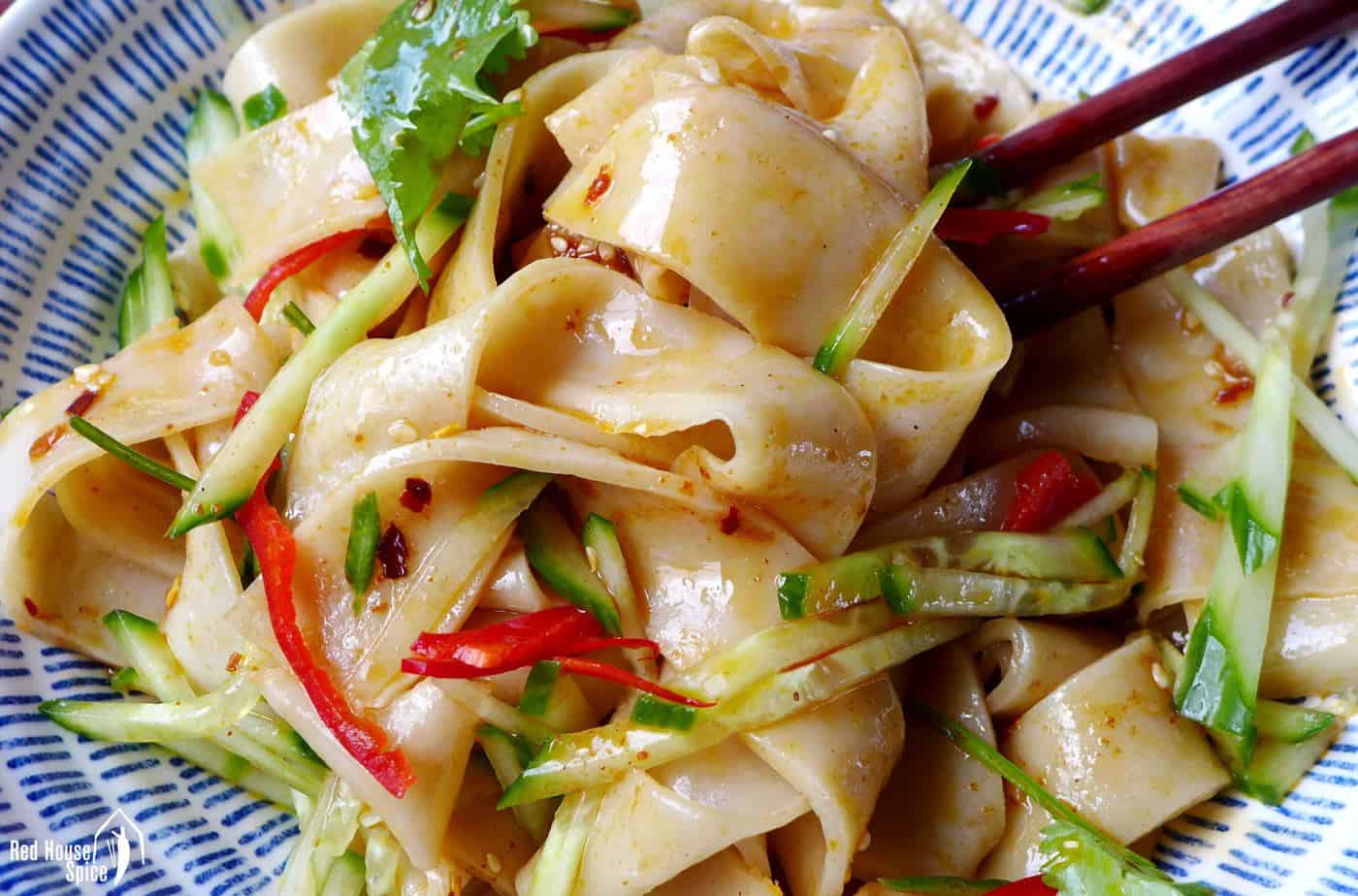 As a popular street food in north-west regions of China, Liang Pi has numerous versions in terms of flour type (wheat or rice), preparation method and sauce. You could easily find two different types of Liang Pi in two neighbouring towns.

Local debates about which one tastes best are endless. For me, they are all scrumptious in their own way and I always enjoy searching for new inspiration on how to prepare it in my own kitchen. 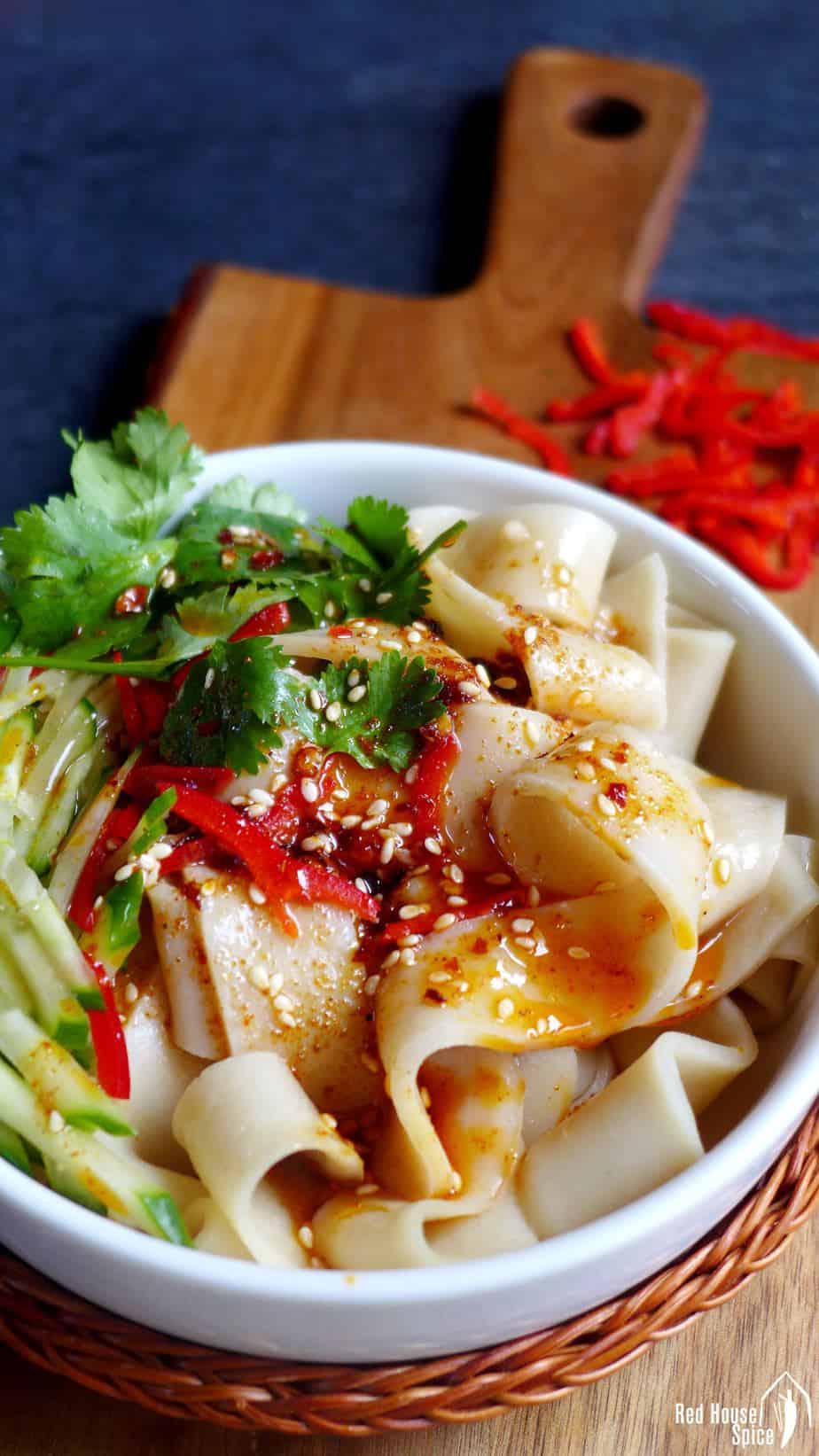 The most common type of Liang Pi is made of wheat flour. Traditionally, a very particular method is applied in preparation:

However, don’t be intimidated by the “authentic” method! What I share with you is a simpler version which skips the entire dough making and rinsing process.

Mix flour and water then leave to rest. That’s it! The finished texture is almost as good as the traditional Liang Pi (just a little bit less elastic if you like).

Since I started cooking it this way, Liang Pi becomes a regular treat in our Red House and I’m trying to make it part of the “snack memory” of my own children.

Tips on cooking it more efficiently

When the flour and water batter is ready to use, you need to pour it into a shallow tray (a few spoonful at a time) then leave the tray floating on boiling water to steam. To make this procedure less time consuming, I have two tips for you: 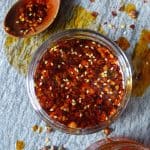 There are many ways to season a bowl of Liang Pi. However, three ingredients are indispensable:

I have written a post on how to make Chinese chilli oil in which I include a comprehensive version and a simple version as well.

In addition, I like the idea of “spiced water (香料水)” which is widely used for Liang Pi in the region where I grew up (the centre of Gansu province in China).

Cook Chinese cinnamon (cassia cinnamon), star-anise, bay leaf, fennel seeds and Sichuan peppercorn in simmering water for a few minutes then leave to cool. This “spiced water” will give the dish a more sophisticated taste. 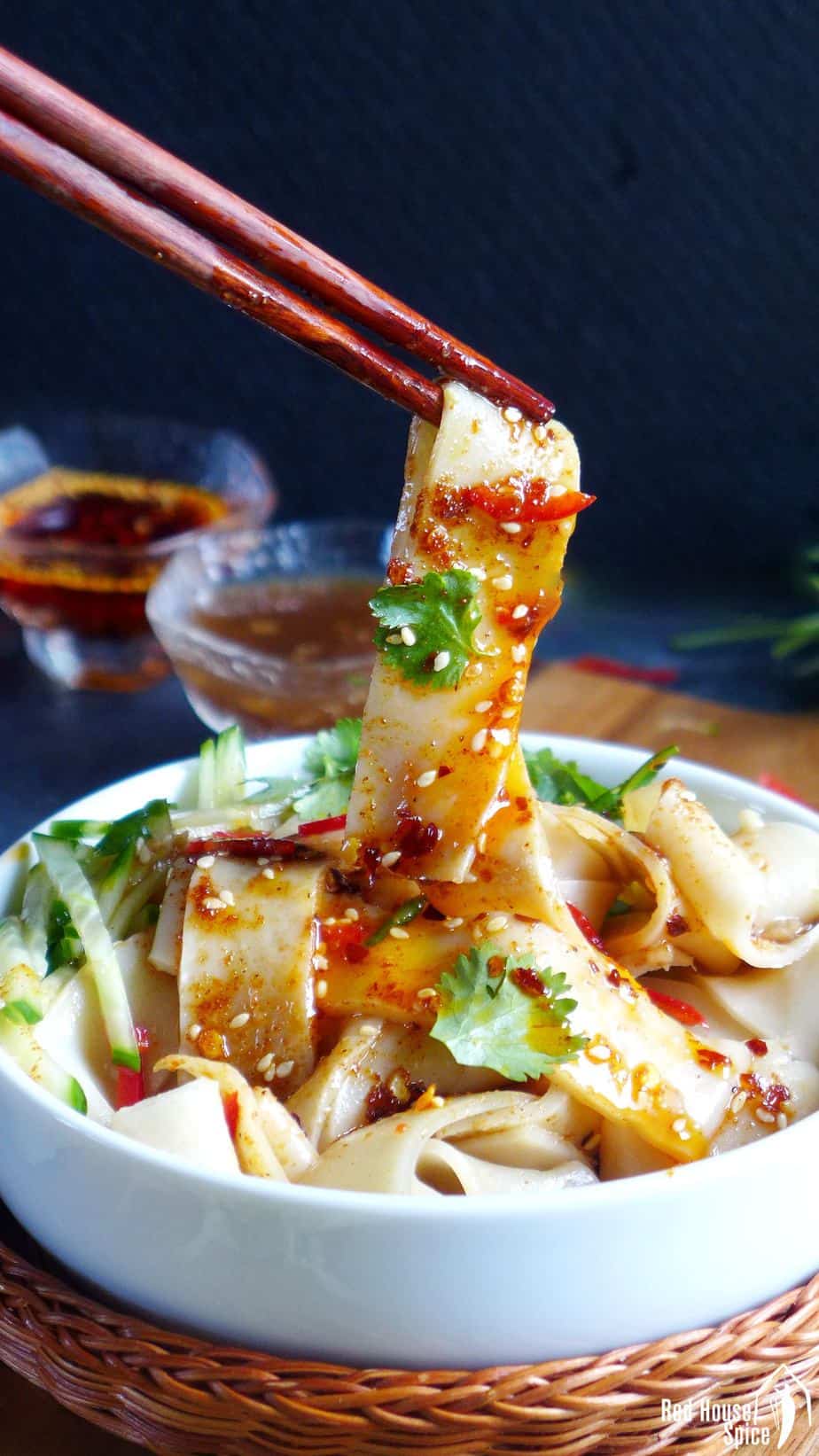 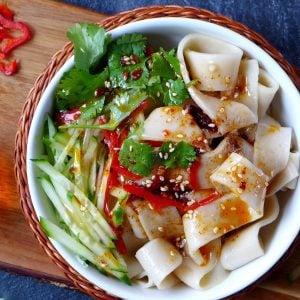 1. How to choose the tray: In China, people use round trays made of stainless steel or aluminium which are not usually available in regular supermarkets in the West. Luckily, you can simply replace them with baking trays (sheet pans). Whatever you choose, remember the following:   2. Efficient rotating method: To save cooking time, I always use two trays to rotate. While waiting for the noodle on the first tray to cook, you can oil and fill the second one with batter. Right after you remove the first tray from the steamer, you can place the second one in. By the time you peel the cooled noodle off the first tray and fill it again with batter, the second one will be ready to take out.

Several of my readers have noted that my blog posts made them feel nostalgic. I can definitely relate to that sentiment. But the good news is that many of my childhood (or hometown) related foods can easily be cooked at home. It always gives me great pleasure to share my recipes with you all.

Have a wonderful day!