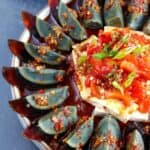 Have you ever tasted century eggs? Read this post which dispels the myths and learn a classic salad recipe that showcases this delicacy.

Although a delicacy loved by Chinese for hundreds of years, century eggs, for those who aren’t familiar with them, is considered a mysterious, questionable food item that takes some courage to try. Before talking about today’s century egg salad recipe, let me first explain some of the facts that you might find interesting.

What are century eggs?

I have no idea where those English names come from, but they’re surely responsible for the misconception of century eggs being exceptionally old. In fact, it takes only a few weeks to produce them from scratch.

How are century eggs made?

The most common type of century eggs are made from duck eggs. However, other types, such as chicken eggs, goose eggs and quail eggs can be preserved the same way.

The traditional method involves the following procedure (I used to watch my mum preparing them when I was a child):

Modern mass production methods use a liquid solution to speed up the process. But the end result is very similar.

During the curing process, the pH of the egg raises gradually. According to Wikipedia, “This chemical process breaks down some of the complex, flavourless proteins and fats, which produces a variety of smaller flavourful compounds.“

Eventually, the egg white turns into a dark amber, translucent jelly, whereas the yolk gains a greyish green colour and a soft, creamy texture (sometimes runny and gooey in the middle). Another interesting feature is the pine branch (or snowflake) pattern on the surface of the egg white (You might see century eggs with a yellow appearance. They are preserved chicken eggs rather than duck eggs).

There is no doubt that century eggs are an acquired taste (like many other sophisticated delicacies). While the egg white offers a mild flavour, the yolk tastes like rich, mature cheese with a hint of ammonia.

Do you need to cook century eggs?

The curing process makes century eggs edible as it is. So no further preparation is required. You can peel them and use directly in salad dishes like today’s recipe. Also, they can be found in cooked dishes, such as in Cantonese style congee (rice porridge) or stir-fries.

Where can I find century eggs?

Century eggs are commonly available in Chinese stores, usually in the chilled section. You might find them covered with a brown mixture of clay and grain husks, or just like regular duck eggs with a slightly darker shell. Check carefully to avoid the ones with cracked shells.

A combination of two classic salads

Today’s recipe is a combination of two classic century egg salads that I really adore. One is served with roasted pepper (Shao Jiao Pi Dan/烧椒皮蛋), whereas the other is made with silken tofu (Pi Dan Dou Fu皮蛋豆腐). I combine both of these elements with century egg and serve the dish with a Sichuan style dressing.

Slice the eggs into wedges

As I mentioned earlier, century eggs are ready to eat so no cooking is required. Simply peel off the shell and rinse briefly under running water. Cut it into equal-sized wedges. Sometimes the yolk can be gooey thus sticks to the knife easily. In this case, wet the knife a little beforehand.

Roasted pepper adds a pleasantly smoky flavour to the dish. You can produce it using any of the following methods:

Depending on the size of your pepper and the method, the roasting time varies. It’s ready when you notice the skin becomes wrinkly, black charred spots appears and the flesh yields easily when squeezed. Use a spoon to scrape off the skin then cut the flesh into thin strips.

I use the first method since Chinese home cooks tend to handle most tasks with one single wok. Food blogger Tori Avey has a great guide on how to roast peppers using the other two methods.

Use the softest type of tofu

Choose the softest type of tofu that’s nice to eat without further preparation. I like the Japanese style silken tofu (Juan Dou Fu/绢豆腐) which almost melts in your mouth. As it’s very fragile, handle gently when slicing. An alternative way is to put a whole block of tofu onto the serving plate, then use a spoon to break it into bite-sized pieces.

After placing three main ingredients on a serving plate, you can start making the simple dressing which elevates the overall flavour of the dish.

Another classic way to enjoy century egg is to add it to Cantonese style congee. You can follow my Easy 15-min Chicken Congee recipe and put in chopped century egg along with the meat. 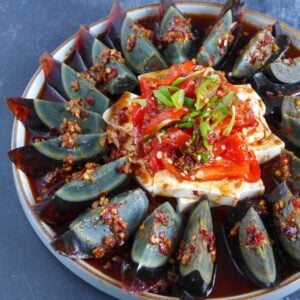 1. I use sweet pointed red peppers for this recipe. You may choose other types if you wish. 2. Silken tofu (Juan Dou Fu/绢豆腐) has a high water content thus it’s very fragile. Handle gently. 3. You may use shop-bought Sichuan pepper powder. However, if time permits, I recommend that you make freshly ground Sichuan pepper which tastes much better. 4. You may also roast the pepper over a burner or in the oven.

Serving: 1 serving | Calories: 191 kcal
Cooked this recipe?Show me your dish or ask me questions @red.house.spice

If you haven’t tasted century eggs before, I hope you find this post inspiring and give it a try!