Consumed throughout the day, bread is a very common staple in China. This introduction explains the diversity of Chinese bread and its cultural significance.

I was delighted when Fran, food blogger at Little Zurich Kitchen, invited me to contribute to her “World Bread Series”. As a huge fun of Chinese bread, I was more than happy to share my in-depth knowledge of this delectable, yet less well-known, aspect of Chinese cuisine. Many readers of my blog have been motivated to learn more about Chinese food culture, therefore I decided to post my article from Little Zurich Kitchen here.

To many people’s surprise, bread is a common staple food in Chinese households. Traditionally, people in northern China live mainly on wheat-flour based dishes such as noodles and bread. Unlike noodles, Chinese bread hasn’t gained as much attention as it deserves.

Growing up in Gansu, a province located in the northwest of China, I have many childhood memories related to the delicious bread made by my parents. I still remember that every now and then my mum or my dad would ride their bicycle to the local “Grain and oil supply centre” and bring home a 25kg bag of flour for making bread and noodles.

I spent lots of time playing around my parents while meals were prepared. I relish the first bite of freshly cooked bread. Even though it was extremely hot, the natural wheat flavour of the bread was pure contentment!

In terms of cooking method, Chinese bread is either steamed or pan-fried (oven baking is not a home cooking tradition in Chinese household) and I love both types equally. In most cases, the dough involves only 2-3 ingredients: flour, water and yeast (if needed).

In Chinese families, bread is served throughout the day. A plain steamed bun (Mantou, 馒头) with a bowl of Chinese congee and some preserved vegetables would make a great breakfast. As the buns are normally cooked in the evening (it’s a time-consuming job), my parents would reheat them briefly in a steamer in the morning to serve them hot. Sometimes, I would cut the bun in half and spread with some fermented bean curd (aka Chinese cheese) to make a fried egg sandwich. Very comforting indeed. 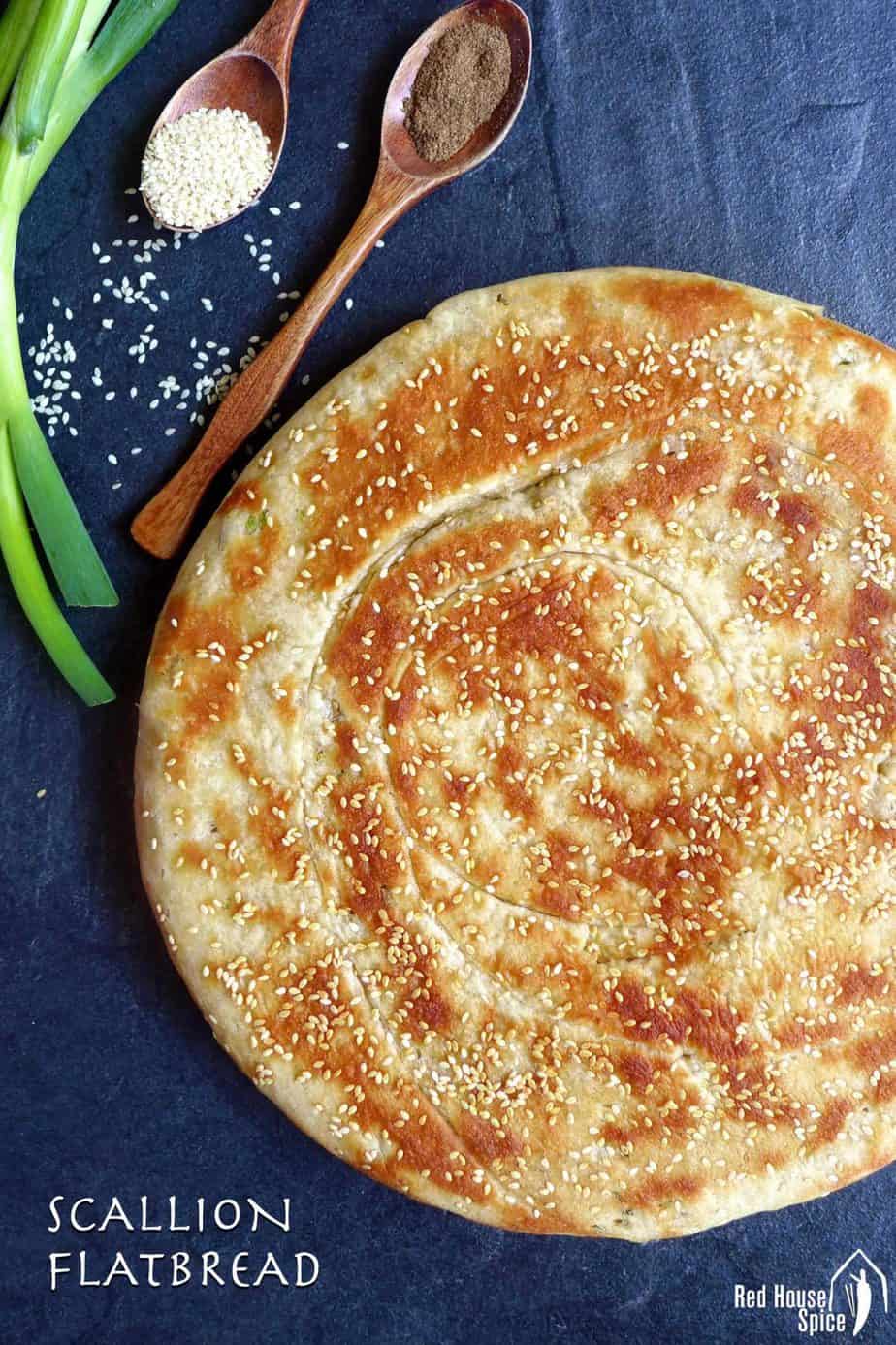 For lunch and dinner, bread is often served with savoury dishes of meat and vegetable, and a bowl of soup or congee on the side. My favourite was the leavened flatbread (Bing, 饼) which my mum used to cook in an old-fashioned cast-iron frying pan. She didn’t use any oil thus the bread had a slightly burnt taste which I found very pleasant and appealing. Inspired by my mum’s best flatbread, I wrote a recipe for “Leavened scallion flatbread” on my blog as a way to pay tribute to her effort.

Apart from the two types of plain bread I mentioned above, you can find numerous varieties of bread in restaurants, grocery shops and food stalls across China. Here are some examples:

▲ Hua Juan (Flower rolls, 花卷) are a variety of Chinese steamed buns. They are layered with a tasty filling made of scallions, spices, salt and oil. I love cooking them in two ways: steaming or pan-frying.

▲ Chunbing (Spring pancake, 春饼)  is a paper-thin steamed pancake which is used to wrap slices of the famous Peking duck.

▲ Cong You Bing (葱油饼), known as scallion pancake in the West, is a layered, savoury, crispy flatbread popular throughout China. It’s pan-fried in oil and seasoned with spring onion and spices. Spiced beef flatbread (香酥牛肉饼) is another example of this type.

▲ Rou Jia Mo (Chinese pork burger,肉夹馍) is one of the most popular street food that you can find in the city of Xi’an, the home of the Terracotta Army. The “burger” bun has a unique dense texture.

▲ Baozi (包子) refers to bread stuffed with meat or vegetable filling. They can be either steamed or pan-fried. Sheng Jian Bao (pan-fried pork buns, 生煎包) from Shanghai is one of the most famous of this kind.

▲ Youtiao (油条), know as Chinese doughnut or Chinese churros, is a typical breakfast staple food consumed every day across the country. It’s deep-fried leavened dough with a hint of saltiness and considered the best companion for soy milk.

▲ Nang (Uyghur flatbread, 馕) is a speciality originating from Xinjiang, an autonomous territory in northwest China. It’s baked in tannurs (a type of oven that’s built with sun-dried earth bricks) and can be stored for a very long period of time thanks to its low water content.

Apart from daily consumption, Chinese bread also has cultural significance. For example, families would cook steamed buns two days before the Chinese New Year (Spring festival, 春节). This is part of the ancestor worship ritual. Sometimes, buns would be placed in front of a home altar.

I had lots of fun helping my parents shape the buns as on this occasion you are supposed to make steamed buns into various shapes: animals, flowers or some symmetrical forms. Once when my grandma (who lived nearly 2000 km away from us) visited us during the new year holiday, she kindly taught me how to make a fish-like bun. I still vividly remember how she gently pressed her wooden comb over the dough to make fish fins.

Nowadays this tradition still remains a regular practice in rural China but rarely can be found in big, modern cities like Beijing or Shanghai.

Influenced by northern Chinese dietary habits and my family’s love for food, I’m a huge fan of Chinese bread and that passion is growing every day. Living in a small town in England where Chinese bread is non-existence, I make everything from scratch for my family and I always encourage my children to get involved, just like what my parents did many years ago.

On my Culinary Tours of China, I, along with my tour participants, am constantly rediscovering and reconnecting with the diverse, magical world of bread. Inspired by what I see and eat on the journey, I’m very enthusiastic in sharing more scrumptious bread recipes with my blog readers.